With its fleet of 42 relatively fuel-hungry and ageing MD-80s Allegiant Air is an unlikely success story. But last year, as passenger numbers grew by almost 30%, the airline posted an operating margin (+11.2%) that most of the world’s airlines can only dream of. Its network philosophy is relatively simple. As the self-proclaimed “Official Airline for Sunshine” it serves major US leisure destinations (primarily Las Vegas and Florida) from a wide-range of small regional airports right across the US. On over 70% of the 130 routes that will be operated this summer weekly frequencies are four or less.

Last week the airline announced that Los Angeles would become its sixth base with the launch of 12 new routes during May. Two 150-seat MD-80s will be based at the airport. Each of the new routes will initially be operated just two or three times per week.

Rising fuel prices in 2008 encouraged the airline to cut back frequencies (which pushed up fares) and focus even more on operating only on days when people want to travel. Load factors during 2008 averaged just under 90% with a peak of 95.2% in July. Unlike many other airlines when they expand rapidly the average sector length fell in 2008 for the second straight year from 923 miles to 882.

70 airports served across the US; 11 added since August

Since Allegiant Air no longer provides updated schedule data to either OAG or Innovata, analysing the airline’s fast-growing network is a challenge. However, by using the airline’s website anna.aero has compiled a route matrix showing which airports are connected to which leisure destinations.

A total of 70 airports will be served this summer and 130 routes operated. Las Vegas, with around one-third of capacity will be connected to 40 destinations while Orlando Sanford is connected to 30 airports. Some 90% of traffic on the Las Vegas routes originates at the other end of the route.

Airports that have been added to the network since last August include Bozeman and Kalispell in Montana, Casper in Wyoming, Grand Forks in North Dakota, Lexington and Owensboro in Kentucky, Columbia in South Carolina, Hagerstown in Maryland, Elmira in New York, Punta Gorda in Florida and most recently Los Angeles in California.

Only show in town at eight airports

At eight of the airports that Allegiant Air serves it is the only airline operating scheduled services. These airports are Fort Collins/Loveland (FNL) in Colorado, Grand Island (GRI) in Nebraska, Hagerstown (HGR) in Maryland, Owensboro (OWB) in Kentucky, Plattsburgh (PLB) in New York, Rockford (RFD) in Illinois, Stockton (SCK) in California and Youngstown (YNG) in Ohio. 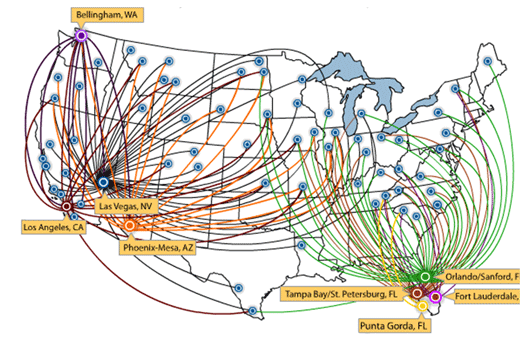