This week saw the launch by AirAsia X of long-haul, low-cost flights between Asia and Europe. Using an A340 the airline is linking Kuala Lumpur with London Stansted five times per week. This will complement its existing services using three A330s from Kuala Lumpur to Melbourne, Perth and the Gold Coast in Australia and Hangzhou (Shanghai) in China. AirAsia X becomes the second Asian carrier to attempt long-haul low-cost flights between Europe and Asia following Oasis Hong Kong, which operated to London Gatwick from Hong Kong between October 2006 and early 2008.

The UK to Malaysia market grew rapidly during the 90s from 185,000 annual passengers in 1990 to over 660,000 in 2000. Between 2000 and 2005 the market was relatively stable but since then it has fallen significantly to just 400,000 passengers in 2008. Manchester non-stop services which were started by Malaysian Airlines in 1999 ended in 2006. At present only Malaysian Airlines operates non-stop flights (twice daily) between London Heathrow and Kuala Lumpur. British Airways ended its non-stop flights to Malaysia in 2001. 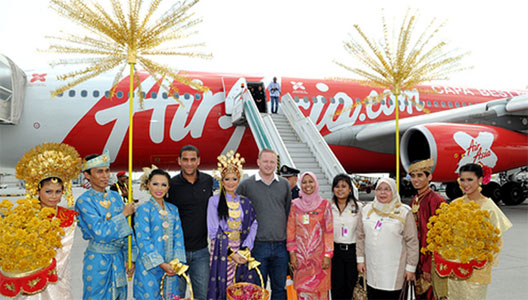 With only one aircraft dedicated to the route and a flight time of between 13 and 14 hours it is not possible to operate a daily service. As a result AirAsia X operates five weekly flights with a variety of departure times to keep the aircraft in the air as much as possible.

Turnaround times at London Stansted are scheduled for between 80 and 90 minutes. Ground time at Kuala Lumpur is considerably longer. Based on the schedule the A340 will operate for over 19 hours per day.

AirAsia X around 20% cheaper than Malaysian

Based on a snapshot of fare data collected by anna.aero for one-week trips originating in the UK during the next eight months, AirAsia X’s fares are around 20% lower than those of Malaysian Airlines operating from London Heathrow.

Fares shown include all taxes and fees for a return journey for a random week in each month. For Malaysian the cheapest available combination of flights was selected during each travel period. On eight occasions out of nine AirAsia X is cheaper. While this is only a small selection of potential travel dates it gives a good indication of how AirAsia X’s fares compare in the market.

Connections to over 50 other destinations

From AirAsia’s low-cost terminal at Kuala Lumpur airport it will be possible to connect to over 50 other destinations in 15 countries, though connection times will vary considerably depending on the route and day of travel. AirAsia connects to 14 other Malaysian airports from Kuala Lumpur, plus 13 in Indonesia. In addition there are daily flights to Bangladesh, Brunei, Cambodia, China, India, Philippines, Singapore, Thailand and Vietnam. At Stansted, budget-conscious Asian travellers will be able to connect to over 130 European destinations primarily served by either Ryanair (100 routes) or easyJet (22 routes).