Venice now #1 base for MyAir; also big in Bari, Bergamo and Bucharest

Italy’s MyAir.com began operations as a self-proclaimed low-cost airline in December 2004 with a small fleet of A320s. Since then it has grown its A320 fleet while also acquiring new Bombardier CRJ900s. It currently operates four of the large regional jets and two A320s while also wet-leasing a 737-300 and a couple of MD-80s. It also operates a Saab 2000 wet-leased from Darwin Airlines from a new mini-base in Foggia. Last year the airline announced a “strategic alliance” with Bratislava-based SkyEurope.

Last year the airline carried 1,523,384 passengers up 6.3% on 2007. Average annual load factor also increased from 67% to 70.7%. Since its inception the airline has had no clear network strategy launching (and abandoning) routes with relative abandon. Last summer the airline operated some 60 routes but that has fallen to around 40 this winter.

Venice will be busiest base this summer

According to data filed by the airline with OAG, Venice Marco Polo airport will be the airline’s busiest airport this summer with over 60 weekly departures to 13 destinations including summer peak only routes to Casablanca, Ibiza, Marrakech and Sofia. Paris Orly is the most frequently served destination with 12 weekly flights.

The airline’s four next busiest airports are a curious mix led by Bucharest Baneasa in Romania, Bari (Italy’s 15th busiest airport in 2008), Milan Bergamo and Foggia (which handled less than 30,000 passengers in 2008). Both main Paris airports also rank in the top 12. Orly is served 12 times weekly from Venice while Paris CDG is served between three and four times per week from Bari, Bologna and Brindisi.

Bologna base dismantled; Foggia base created

In the summer of 2007 MyAir.com operated to 10 destinations from Bologna, but that has now been reduced to just two this winter. The Milan Malpensa network which had reached six routes in 2007 is now just linked with Foggia.

Foggia airport became a mini-base last October with the launch of routes to Milan Malpensa, Palermo, Rome Fiumicino and Turin. Located in the Puglia region of Italy, the airport has a 1,560 metre runway.

Rimini added to network this summer 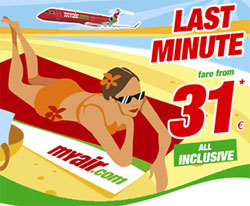 For the first time MyAir.com will be operating scheduled flights from Rimini this summer. Weekly services to Amsterdam, Bucharest and Paris CDG will operate from May. Other new services planned to start this summer include Bari to Istanbul, Brindisi to Munich, Brindisi to Vienna, Foggia to Bologna and Foggia to Geneva.

During the last year the airline has dropped a significant number of routes (many to French destinations) which have recently been added to anna.aero’s Route Recycle Bin.