Ethiopian growing profitably from Addis Ababa; new Q400s due in 2010

With an estimated population of around 80 million people Ethiopia is Africa’s second most populated country. According to current OAG data it has 16 airports which offer commercial scheduled services. These are dominated by Bole International Airport at Addis Ababa (ADD) which in 2007 handled over 2.8 million passengers. Ethiopian Airlines dominates traffic at the airport with around three-quarters of all scheduled capacity.

The airline has grown rapidly and profitably and has doubled its passenger numbers during the last four years. In its most recent financial year it reported carrying 2.72 million passengers on a fleet of 30 passenger aircraft including 11 767s, eight 757s, six 737-700s and five Fokker 50s. Ethiopian has placed an order for 10 787s and eight Q400s, with deliveries of the latter starting in September 2010. These will replace the Fokker 50s. 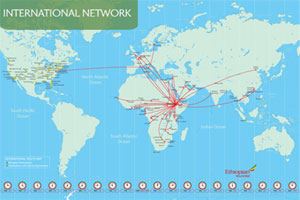 Other European destinations include Frankfurt and Paris CDG (both served non-stop), as well as Brussels (served via Frankfurt and Paris CDG), London Heathrow (served via Rome) and Stockholm Arlanda (also served via Rome). Other Asian cities served include Guangzhou, Hong Kong (both via Bangkok), and Mumbai.
The newest destinations to be added to the airline’s network include Sana’a (June 2007), Zanzibar (October 2007), Kuwait City (June 08). This June Ethiopian will commence non-stop, as well as indirect, services to Malabo in Equatorial Guinea and Riyadh. Commenting on the new Malabo service Ato Busera Awel, Vice-President Commercial said, “This new service is being launched in line with Ethiopian’s firm commitment to connect Africa with the rest of the world, and our flights to Malabo go a long way in connecting another city in Africa to the major capitals of the world.” Ethiopian has entered into code share partnerships with a variety of airlines including British Midland, Brussels Airlines, Gulf Air, Kuwait Airways, Lufthansa, Saudi Arabian Airlines, and South African Airways as preparation for possible future membership of the Star Alliance.

Emirates is the second biggest carrier at Addis Ababa airport with daily flights to Dubai and Entebbe and is the only MEB3 airline operating at the airport. European carriers present include Lufthansa (from Frankfurt and on to Sana’a), Turkish Airlines from Istanbul and KLM from Amsterdam. Bmi serves London Heathrow via Amman in Jordan with three weekly flights. 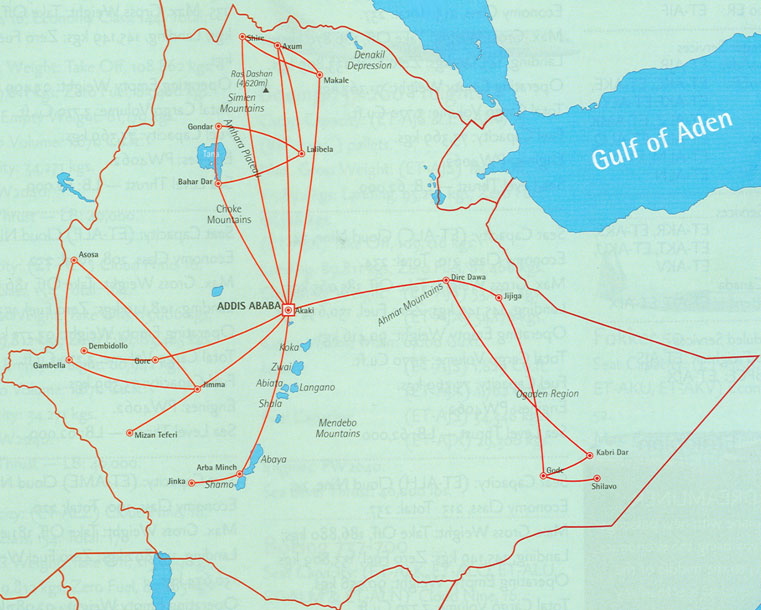 In the domestic market Ethiopian enjoys a monopoly. The airline’s Fokker 50s are used on most of the routes. Bahar Dar, Dire Dawa, Gonder, Axum, Mekele, Laibela and Jimma each cater for between two and six daily departures to other domestic destinations.