Nestled at the southern tip of Brazil and sharing a river border with Argentina to its west, Uruguay is the second smallest country in South America with a population of just 3.5 million people, and the smallest in terms of population ever to win the FIFA football world cup.

Its national airline, Pluna, has had a chequered history (including a period when it was part-owned by Varig) but has recently re-invented itself once again under the management of Leadgate, a multi-national business consultancy. Based at Montevideo (MVD) airport the airline has recently undergone a major fleet overhaul and currently operates a fleet of seven 90-seat CRJ 900s, all in a distinctive corporate style but each with its own colour. Last year the airline carried 490,000 passengers (up 4%) and hopes to carry well over 600,000 passengers this year.

Pluna’s key route is linking the capital of Uruguay with the capital of Argentina, Buenos Aires. The airline serves Buenos Aires Aeroparque Jorge Newbery (AEP) rather than the main Ezeiza international airport (EZE). Daily frequencies vary between four on a Saturday to 11 on a Friday with an average of around seven daily flights. Pluna serves AEP non-stop from both Montevideo and Punte del Este (PDP). 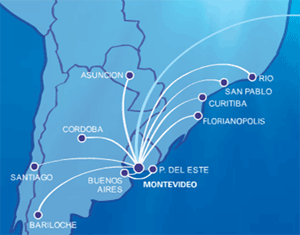 Other countries served by Pluna at present are Brazil (Curitiba, Rio De Janeiro and Sao Paulo), Chile (Santiago) and Paraguay (Asuncion). In addition the airline also serves Cordoba in Argentina. According to Roberto Luiz the airline’s Commercial Projects Director the airline will be starting new services to Trelew in Argentina (from 27 May) and Porto Alegre in Brazil (from 26 June). A seasonal route to Bariloche will operate every Saturday between 20 June and 29 August while summer-only flights to Florianopolis will resume in December.

The airline’s website enables bookings to be made to a variety of Spanish and US destinations courtesy of code-share arrangements with Iberia (via their Madrid hub) and with American.

Carrasco International Airport in Montevideo handled around 1.5 million passengers last year. Pluna is the largest airline at the airport with no other airline operating more than two routes. Aerolineas Argentinas competes on flights to AEP while American serves EZE as well as Miami. Copa flies to Panama City, Iberia to Madrid, LAN to Santiago, TACA to Asuncion and Lima, TAM to Sao Paulo and Varig/Gol to Porto Alegre.

A striking new terminal, designed by US-based but Uruguayan-born architect Rafael Viñoly, has been under construction since 2007 and should open later this year with a capacity for three million annual passengers. It will have four jetways.