Catania-based locally-owned Wind Jet began operations in June 2003 with flights from Catania to Rome Fiumicino using an A320. The airline’s network has since developed steadily focussing primarily on scheduled flights from Catania and Palermo (on the island of Sicily) to mainland Italy. However, last December it revealed plans to create a base at Bologna Forli (FRL) airport after Ryanair decided to move services to Bologna’s main airport (BLQ).

With a fleet of 12 A319/A320s Wind Jet the airline carried 2.7 million passengers last year, up from 2.5 million in 20007. This summer it will be operating scheduled services from around 30 airports including for the first time an airport in the UK. According to the airline six aircraft will be based at Catania, five at Palermo and one in Forli. Flights to and from its two main Sicilian airports still account for around 80% of capacity but the new Forli base serves most destinations. 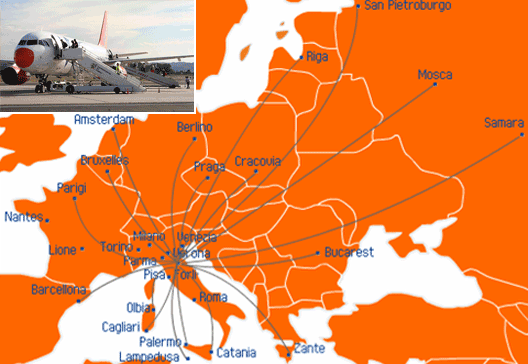 The Forli base serves many destinations non-stop that are not served from anywhere else on the airline’s network. These include Amsterdam, Berlin Tegel, Brussels, Cagliari, Krakow, Olbia, Naples, Prague, Riga, Samara and Timisoara plus the recently announced routes to London Luton (from 2 July) and Zakinthos (from 16 July).

The only other scheduled routes operated by the airline that are not from one of its three main bases are a couple services from Verona to Moscow Domodedovo and St Petersburg. Both of these operate just weekly.