B&H Airlines, the national airline of Bosnia & Herzegovina, recently took delivery of its first 737-400. Since the end of 2008 Turkish Airlines has owned a 49% share of the airline and the new addition to the B&H Airlines fleet has come from them. The rest of the fleet consists of two ATR 72-200s. With the arrival of the 737 several new “longer-haul” destinations will be launched from Sarajevo in the near future. 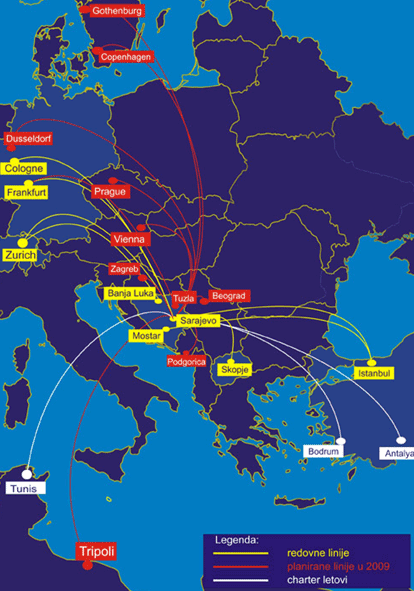 The three Scandinavian routes and Dűsseldorf will use the new 737 while the ATRs will be used on the remaining services.

Apart from routes from its base at Sarajevo, B&H Airlines also operates scheduled flights between Banja Luka and Zurich, and Mostar and Istanbul.

Sarajevo now handles over half a million passengers

In addition, two LCCs (Germanwings and Norwegian) offer low-frequency connections to Cologne/Bonn, Oslo Rygge, Stockholm Arlanda and Stuttgart. There are currently no direct scheduled services to anywhere in France, Spain or the United Kingdom.