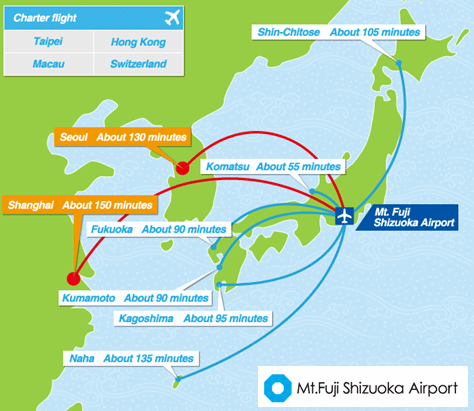 It’s not everyday that a new airport opens so congratulations to everyone involved in getting operations underway at Mount Fuji Shizuoka (FSZ) airport in Japan. The airport is located between Nagoya and Tokyo and is less than 200 kilometres from both airports but serves a catchment area of almost four million people.

Operations were put back from a planned start date in March due to environmental and noise issues which have resulted in the effective runway length being shortened from 2,500 metres to 2,200 metres. The hours of operation are from 08:30 to 20:00 and there is currently free parking for up to 2,000 cars.

Mix of domestic and international routes; home of FDA

Japan’s two biggest airlines ANA and JAL are both serving the new airport and compete directly on the routes to Shin-Chitose. Fuji Dream Airlines (FDA), a new airline which will be based at the airport begins operations towards the end of July using an Embraer E170 jet.

Apart from these scheduled services the airport has also revealed that there will be a number of charter services during the summer season operated by Cathay Pacific (to Hong Kong), Edelweiss (to Zurich), China Airlines (to Taipei) and Air Macau (to Macau).