Guernsey and Jersey form the Channel Islands which are a British Crown Dependency but are neither part of the UK nor the EU. However, they are part of the Common Travel Area and are much closer to the French coast than the UK coast. Air travel plays an important role in the community with airports on both islands. Traffic flows are dominated by flights to and from the UK.

Passenger numbers have been quite stable for the last decade. Although total traffic across the two main airports has increased in each of the last two years total demand is still below the levels achieved in 2000.

Seasonality is more pronounced at Jersey airport where peak summer demand is twice as high as in winter months. Demand has suffered less in 2009 than at many UK airports though from January to May Jersey traffic is down 11.6% while Guernsey is down just 6.7%.

Flybe dominant at Jersey with 24 routes 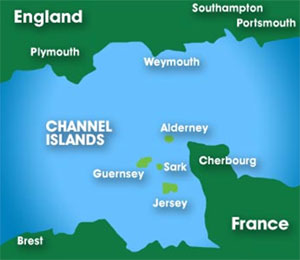 Flybe, which was known as Jersey European until 2000 when it rebranded as British European before taking on its current identity in 2002, is the leading airline in Jersey operating 24 routes, 22 of which are to UK airports (plus Paris CDG and Nice).

Since the beginning of 2008 it has added domestic routes to Aberdeen, Doncaster/Sheffield, Dundee, Humberside, Inverness, Manston and Newquay as well as the two French services. Most of these though operate only during the summer with typically just one weekly frequency.

easyJet started a London Luton service at the end of March 2008 but this has now been abandoned while Aer Lingus (Cork), bmi (London Heathrow), bmibaby (Birmingham), Flyglobespan (Durham Tees Valley) and Thomsonfly (Coventry) have all found it necessary to abandon Jersey routes in the last 18 months.

For many in the UK Jersey is synonymous with the TV series Bergerac which ran for 10 years (1981-1991) and featured Detective Sergeant Jim Bergerac solving cases while driving around the island in a maroon 1947 Triumph Roadster.

Aurigny operates most flights at Guernsey

The only non-UK route is to Dinard which Aurigny serves daily. In May the airline began daily flights to East Midlands. Aurigny, which is owned by the state of Guernsey and celebrated its 40th anniversary last year, operates a fleet of three ATR 72s and eight 15-seat Britten-Norman Trislanders.