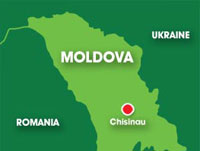 The Republic of Moldova is an Eastern European country bordered by Romania and the Ukraine. Its capital is Chişinău (also formerly known as Kishinev) which is also the location of the country’s major airport and the home of national carrier Air Moldova. Passenger numbers at the airport have been climbing rapidly in recent years and reached a record high last year of almost 850,000.

The national airline evolved out of the local branch of Aeroflot in 1992 after Moldova achieved independence from the Soviet Union in August 1991. It has transitioned from a Russian fleet to a Western fleet and currently operates three 173-seat A320s and one 30-seat Embraer 120 (which is used on routes to Bucharest, Prague and Vienna). The airline has ordered an Embraer E190, which should enter service in the first quarter of 2010. Last year the airline carried almost half of all passengers passing through Chişinău airport.

Last year the top two destinations for passengers were Moscow Domodedovo (177,000) and Istanbul (142,000). In total this summer Air Moldova serves 13 destinations non-stop from Chisinau using its own aircraft and also operates to London via Paris, and to Lisbon via Madrid. The most recent route addition was to Milan Malpensa which the airline operates as a codeshare with Meridiana. A new weekly service to Varna in Bulgaria begins on 4 July.

Other carriers serving the Moldovan capital include airBaltic (from Riga, but no longer from Vilnius), Austrian (from Vienna), Carpatair (from Timisoara), Meridiana (from Milan Malpensa and Verona), S7 (from Moscow Domodedovo), Tarom (from Bucharest Otopeni) and Turkish Airlines (from Istanbul).

Another local airline, Moldavian Airlines, operates one Fokker 100 and two Saab 2000s and currently serves Budapest and Timisoara. Despite sharing a boundary with Ukraine there are currently no scheduled services to Kiev, Odessa or other major cities in that country. According to OAG Air Moldova did operate a weekly service to Kiev in the summer of 2008 but this appears to have been discontinued. There are also currently no routes to Poland or anywhere in Scandinavia.