Bolivia is surrounded by Argentina, Brazil, Chile, Paraguay and Peru. With a population of just over nine million people spread across over one million square kilometres (around twice the size of Spain) it has a population density similar to that of Russia at just over eight people per square kilometre. Spanish is the dominant national language. According to OAG data for July there are 15 airports in Bolivia with scheduled commercial flights, the largest of which are Santa Cruz (Viru Viru), La Paz (El Alto) and Cochabamba (Jorge Wilstermann), all of which are now run by Spanish firm Abertis which acquired the concession rights when they acquired TBI. La Paz is best known in the aviation industry as one of the highest airports in the world, at over 4,000 metres altitude.

Traffic at these three airports has grown by 25% during the last three years despite the collapse of one of the country’s biggest airlines, Lloyd Aereo Boliviano (LAB). These top 3 airports account for around 70% of all Bolivian airport traffic, though the busiest airport for aircraft movements in Bolivia appears to be Trinidad (TDD) which is dominated by 19-seat aircraft. 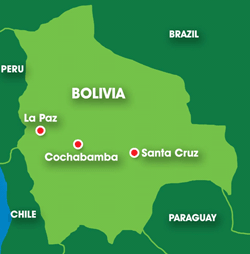 Almost 95% of all flights from Bolivian airports are on domestic routes. However, these flights represent less than 85% of capacity as the relatively few international services that do operate use significantly larger aircraft. There are non-stop international services to eight countries. The USA tops the list of foreign countries served thanks to flights to Miami operated by both American and AeroSur. Peru is served by AeroSur, LAN and TACA while AeroSur and Gol/Varig serve Brazil. Spain (Madrid) is served non-stop by both AeroSur and Air Comet.
In the domestic market AeroSur and Amaszonas are the leading carriers.

AeroSur serves US and Spain

Since the demise of Lloyd Aereo Boliviano in 2007, AeroSur has become the dominant airline in Bolivia with its fleet of over a dozen brightly coloured 727s, 737s as well as the odd 747 and 767. Its international route network includes Asuncsion (Paraguay), Buenos Aires (Argentina), Cuzco (Peru), Madrid (Spain), Miami (USA) and Sao Paulo (Brazil).