Korean Air awaits first A380; now serves 15 airports in Japan and 20 in China

Original SkyTeam member Korean Air celebrates its 40th anniversary this year and during that time has carried close to 500 million passengers. From its impressive base at Seoul’s Incheon airport it serves 88 destinations non-stop with its fleet of 100 passenger aircraft. During the first quarter of 2009 international capacity (ASKs) was up 1.3% but traffic (RPKs) was down 3.1%. As a result average load factor fell from 71.6% to 68.4%. 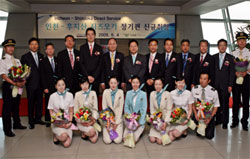 Since the beginning of 2008 the airline has added new non-stop flights from Incheon to Milan, Mudanjiang (China), Sao Paulo, Shizuoka, Tel Aviv and Xian (China). The airline’s network is particularly strong to China, Japan and the USA.

According to the airline’s latest financial report for the first quarter of 2009 32% of passenger revenues come on routes to and from the Americas, 17% on routes to Japan, 13% from both European and South-east Asian routes and just 9% from its Chinese routes. Domestic routes and routes to Oceania (Australia, New Zealand etc) each contribute a further 8% to revenues.

Korean Air offers non-stop flights to 10 US airports, six of which are served at least daily. There are daily flights to Atlanta, Honolulu, Washington Dulles and Chicago O’Hare while Los Angeles and New York JFK are served twice-daily. Dallas/Fort Worth, Las Vegas, San Francisco and Seattle are currently served with between three and five weekly frequencies.

The airline currently serves 11 destinations in Europe with non-stop flights. These are Amsterdam, Frankfurt, Istanbul, London, Milan Malpensa, Moscow, Paris, Prague, Rome, St Petersburg and Vienna. Flights to Munich have recently ended. Madrid and Zurich are served via Amsterdam and Vienna respectively, though the return flights are non-stop.

A380 will join fleet later this year