Cimber Sterling and Ryanair battle for lead at Billund; Legoland also served by BA, KLM and Lufthansa (but not SAS)

Billund Airport is the second busiest airport in Denmark (after Copenhagen) thanks to its proximity to one of Europe’s leading theme parks, the original Legoland, which opened in 1968. The airport even features in model form within the theme park. Traffic at the airport has fluctuated in recent years. International traffic grew rapidly during the early and mid-90s but then trailed off between 1997 and 2003 as charter traffic fell. Since 2003 traffic has surged again, increasing by 50% to just over two and a half million passengers in 2008.

Scheduled international traffic has almost doubled in the last two years with the addition of several new services, primarily from low-cost carriers. This summer both Cimber Sterling and Ryanair are offering non-stop flights to nine destinations. 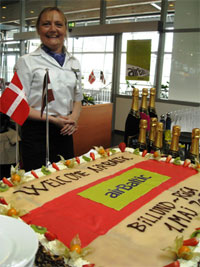 Cimber Sterling is the airline created when regional airline Cimber Air acquired a number of resources of the defunct Sterling. British Airways’ significant presence is down to local franchise partner Sun-Air which operates 32-seat Dornier 328s on routes to Brussels, Helsinki, London City, Manchester and Paris CDG. Other scheduled carriers with a small presence include Atlantic Airways operating daily to the Faroe Islands, airBaltic (three weekly flights to Riga) and Iceland Express (twice weekly to Reykjavik).

Ryanair serves London Stansted twice daily but its other eight routes (to Alghero, Alicante, Birmingham, Dublin, Edinburgh, Girona, Milan Bergamo and Pisa) operate on average with just three weekly flights. Cimber’s nine routes include a domestic route to Copenhagen, which operates 31 times per week. London Gatwick, Munich and Oslo are also all served at least daily. A notable absentee from the list of scheduled airlines is SAS.

Legoland is only open from early April until late October and this is reflected in the airport’s seasonality profile which peaks, as is common for many European airports, at the height of the summer season in July.

Although traffic is down around 13% in the first half of 2009, the current levels are basically the same as those of two years ago. Ignoring those Sterling routes that have now been taken over by Cimber Sterling (London Gatwick, Malaga, Nice, Oslo and Rome FCO) the table below summarises the changes in routes available from the airport during the last year.

Ryanair has basically replaced Madrid and Valencia with new services to Alghero and Edinburgh. Cimber Sterling is due to start six-times weekly Paris CDG services on 3 September and weekly flights to Gran Canaria from the end of October.