Austria’s Vienna base serves 39 airports in Central & Eastern Europe; only six not served by rivals 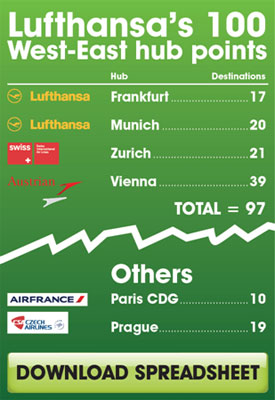 With the attempts by Lufthansa to take control of Austrian dragging on (and on), it seems like a good time to take a different look at what exactly Lufthansa might gain from its acquisition of another hub, this time in Vienna. Austrian’s network strategy in recent years has followed a “Focus East” approach. The airline has consistently based its advertising around the number of destinations it serves in Central and Eastern Europe suggesting that flying with Austrian via Vienna is the best way of getting to all the new countries of the former Soviet Union.

This week anna.aero examines which other major European carriers with hubs in the region also serve these airports. A total of 39 airports on the Austrian Airlines network were identified as being in Central or Eastern Europe (CEE) including six in Russia, six in the Ukraine and four in Romania. The remaining 23 airports are spread across 18 further countries. Austrian operates at least three weekly flights to all of these destinations.

The other hubs examined were Lufthansa’s hubs at Frankfurt and Munich (just 350 kilometres from Vienna) plus the Swiss hub at Zurich which is now also, in effect, under Lufthansa control. In addition CSA Czech Airlines’ base at Prague, Turkish Airlines’ base in Istanbul and Air France’s base at Paris CDG were also analysed.

The remaining 16 airports are all served from at least three of the rival hubs identified. Out of the 39 CEE airports Turkish Airlines serves 23 from Istanbul, while Lufthansa already serves 20 from Munich. It seems unlikely that Lufthansa would want such significant duplication and would look to rationalise any overlap between Munich and Vienna.

For full details of all 39 routes, frequencies offered by Austrian and its various competitors download our free spreadsheet by clicking here.

System-wide during the past year Austrian has dropped 10 routes including four to the CEE region Baia Mare (Romania), Bourgas (Bulgaria), Nizhniy Novgorod (Russia) and Riga (the most significant and only capital city in this grouping). The other routes it has dropped are Chicago O’Hare, Keflavik, London City, Luxembourg, Mumbai, and Nuremburg.

On a macro level the new economies of the CEE have been hit proportionally hard by the downturn as a result of their only very recent rapid expansion and the fact that there have been far less reserves with which to rescue their banks. Austrian’s own geographical performance has mirrored this as passenger numbers for the first half of 2009 show that Focus East passengers (CEE and Middle East) were down 13.8% compared with a decline of 10.2% for the rest of the European network. In the second quarter of 2009 these figures were minus 14.3% and minus 6.5% while in June alone the figures were minus 15.0% and minus 4.4%. In other words, while the non-CEE network is slowly recovering, demand for Focus East routes continues to deteriorate.