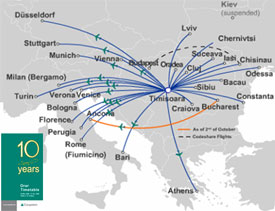 Celebrating its tenth anniversary this year, Romanian regional Carpatair is based at Timisoara in the west of the country and operates a fleet of three 105-seat Fokker 100s and 14 50/53-seat Saab 2000s. This summer it is serving 27 destinations from its base with domestic, German and Italian routes accounting for 21 of them. Other destinations include Athens, Chernovtsy, Chisinau, Lviv, Odessa and Vienna. It also serves Budapest from Chisinau and from the beginning of October will link Bucharest with Ancona.

The majority of routes are served daily (except for Sunday). According to the airline’s own downloadable timetable there are no scheduled flights on any route on Sundays.

Passenger numbers have grown by more than 10% every year since the airline began operating in 1999. Even in 2008 passenger numbers were up almost 11% with the airline adding new routes in the last 12 months to Chernovtsy in Ukraine (since 28 May), Perugia (since 16 June) and Vienna (since last September). However, routes to Frankfurt, Kiev and Thessaloniki have been axed during the last 18 months. Annual load factors have been in the high fifties and low sixties for the last four years.

In 2007 and 2008 demand peaked in July with February the least busy month. Since January of this year passenger numbers have been in decline. In the first five months of 2009 demand has fallen by around 17% and monthly load factors have been below 60%. Based on current traffic levels anna.aero estimates that the airline will carry its three millionth passenger some time in October.