Despite being the fourth largest country in Africa (and 17th largest in the world), Libya has a population of less than six million people which helps explain why, according to current OAG data, Libya has just nine airports with scheduled air services. However, the top two airports of Tripoli and Benghazi account for 97% of the country’s scheduled seat capacity. The only scheduled services at the seven remaining airports are just domestic flights to Tripoli and/or Benghazi. In 2008 Tripoli Airport handled an estimated three million passengers though construction is under way on two new terminals which will give the airport a terminal capacity of 20 million annual passengers.

Two national airlines plus one private

For complex political reasons Libya has found itself with two national airlines; Libyan Airlines and Afriqiyah. These, along with the privately owned Buraq Air, account for around 60% of scheduled capacity at Tripoli airport. 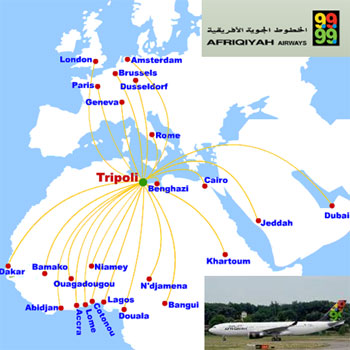 Afriqiyah is the newer of the two airlines (it started flying in 2001) and recently acquired its first A330 and third A319. It also operates an additional five A320s. This summer the airline has plans to operate to seven new destinations; Beijing, Brazzaville, Cape Town, Dhaka, Guangzhou, Johannesburg and Manila. Exact start dates have been hard to pin down but it is believed that South African services will begin this month with the other routes beginning in October.

According to OAG data for September the only destinations that the airline serves daily are London Gatwick and Paris CDG. Brussels, Dűsseldorf and Rome are each served four times weekly while Amsterdam and Geneva each receive three weekly flights. The airline does not currently operate any scheduled domestic services.

Libyan Airlines operates the majority of domestic routes but does ‘compete’ with Afriqiyah on international routes to Cairo, Dubai, London (it serves Heathrow) and Rome. It recently began services to Madrid using a CRJ-900 and also serves Manchester with five weekly flights. The Cairo route also sees local competition from Buraq Air which operates all of its international flights from Tripoli using two 737-800s, which were delivered to the airline in late 2006.

Two of the MEB3 airlines (Emirates and Qatar) also serve Tripoli from Dubai and Doha, while Royal Jordanian provides links to Amman.

The airport’s existing terminals are limited to an estimated three million annual passengers so the airport is now developing additional capacity. Two new terminals, each capable of handling 10 million passengers per annum are being constructed in partnership with TAV of Turkey.