When Aer Lingus announced in 2007 that it would be opening its first non-Republic of Ireland base at Belfast International it seemed the airline had decided that it would seek expansion away from its Dublin home base where it had come under incessant pressure from Ryanair. Belfast opened in December 2007 with eight routes, four of which competed directly with existing easyJet services. This week sees the launch of a new route from Belfast to Tenerife Sur, but overall the airline will only be serving five destinations from Belfast this winter, having at one time or another served 14 destinations from the airport in the last two years.

Among the remaining routes only Malaga is now also served by easyJet, while among the dropped routes easyJet had provided competition on five of them; Amsterdam, Barcelona, Faro, Nice and Paris CDG. Aer Lingus has a monopoly on the London Heathrow service although easyJet serves Gatwick, Stansted and Luton with multiple daily flights. 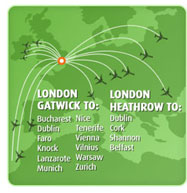 As if taking on easyJet at one base was not challenging enough in April Aer Lingus opened a base at London Gatwick (where easyJet operates more flights than it does at any other airport). It had operated Dublin services since October 2007 but from the beginning of the summer season it launched six routes to mainland Europe plus a daily service to Knock. Routes to Faro, Malaga and Nice were already served by easyJet while Aer Lingus’ decision to serve Munich, Vienna and Zurich drew an instant response from easyJet which promptly decided to launch all three routes as well.

Undaunted, a new route to Vilnius (the capital of Lithuania) was started earlier this month while this winter will see the addition of five further new routes to Bucharest (daily), Eindhoven (daily), Lanzarote (three flights per week), Tenerife Sur (four flights per week) and Warsaw (daily), while the only route to be dropped is the highly seasonal Nice service. Of the five new routes, easyJet will be competing for customers only on flights to Lanzarote and Tenerife Sur.

It should be noted that Ryanair, a significant shareholder in Aer Lingus, will serve eight destinations from Gatwick this winter; Alicante, Cork, Dublin, Girona, Madrid, Marseille, Shannon and Stockholm Skavsta (from 5 November). All of these destinations are Ryanair bases and are operated by aircraft from those bases. If Ryanair ever does manage to take control of Aer Lingus it will be intriguing to see what it does with the airline’s Gatwick base, especially considering how important it is to easyJet.