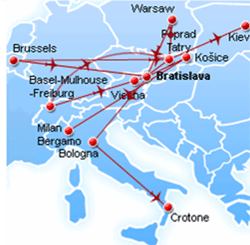 Slovakian regional carrier Danube Wings began scheduled services at the end of March 2009 with a fleet of two 70-seat ATR 72s which has now grown to three. The airline belongs to VIP Wings a private aviation company based in Bratislava. During the summer the airline has operated a mix of scheduled and charter services from three airports in Slovakia; Bratislava, Košice and Poprad-Tatry.

This winter the airline intends to add new services from Bratislava to Brussels and Warsaw, from Košice to Milan Bergamo, and from Poprad-Tatry to both Basel and Warsaw.

Although Kiev appears on the airline’s route map (connected to Poprad-Tatry) there appears to be no reference to it in the on-line booking tool or the airline’s on-line timetable. All of these new routes will be operated by the airline’s existing fleet of ATR 72s.

Deal to operate under ČSA brand

In a move directly related to the demise of SkyEurope, ČSA and Danube Wings have jointly announced that Czech Airlines will wet lease a 737-400 to Danube Wings for “operating several scheduled flights” under the Czech Airlines brand on new scheduled routes: “Especially to London, Dublin and Manchester.”

Commenting on the partnership Arpad Agócs, commercial director of Danube Wings explained: “At this stage we are opening the missing (SkyEurope) connections. Danube Wings does not alter its strategy and philosophy, at all. We are a regional air carrier whose basic fleet is represented by the ATRs. However, we want to devote capacity for covering the essential missing flights with a serious partner like Czech Airlines.”

The airports concerned are equally happy: “The renewal of the traditional connection with Manchester, at such short time after SkyEurope shut down, is a really positive development” said Zdeněk Schraml, Executive Director and Chairman of the Board of Directors of Bratislava Airport.

Ivana Herkeľová, executive director of Poprad-Tatry Airport, is similarly cheered by the news of the renewed London-Luton links: “Over the past four years passengers have become very accustomed to a regular London connection so I am very pleased DanubeWings has been able to renew this. Together with other international flights they offer a very promising future for the development of our airport and region.”