In recent years, many of the UK’s regional airports (those outside of London) have benefited greatly from the introduction of low-cost air services to a wide range of domestic and international destinations. However, the majority of international services have been to a combination of leisure destinations or secondary airports.

An anna.aero analysis of OAG schedule data for November for UK regional airports with a passenger throughput of at least five million passengers in 2008 reveals a number of glaring gaps in the airports’ route portfolios. This is the reason why the world needs The Route Shop. The number of weekly flights to 20 major cities in Europe (plus all of Poland) were identified from nine UK airports; Belfast International, Birmingham, Bristol, East Midlands, Edinburgh, Glasgow, Liverpool, Manchester and Newcastle. 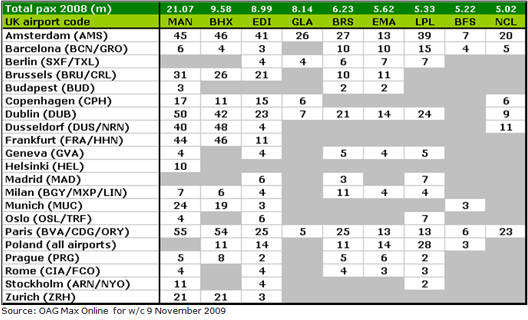 It should be noted that three major EU capital cities (Athens, Lisbon and Vienna) are only served by scheduled services in winter from London area airports. Only Amsterdam and Paris are served from all nine airports, while Dublin is served from eight (the exception being Belfast which is less than 150 kilometres car drive away).

For UK businesses based outside of London (or Manchester) with international clients (or ambitions), the lack of direct services to some of Europe’s major business centres could be considered alarming. Several of the grey squares have had services in recent years. British Airways franchise carrier Maersk Air used to operate several of the ‘missing’ Birmingham routes, while East Midlands lost Copenhagen and Stockholm routes when Sterling collapsed last year. At one point easyJet used to serve Berlin, Budapest, Copenhagen, Prague and Krakow from Newcastle.

Despite the evidence in the table above several of the UK’s regional airports do have some niche routes that clearly cater to local business needs. Birmingham has daily flights to Gothenburg (with City Airline) and Stuttgart (with Flybe) that are still important for the local vehicle related industries, while Newcastle has recently seen the start of daily (on business days) services to Bergen in Norway with Eastern, which is supported by the local energy industries. From Bristol, there are regular flights to Toulouse with easyJet which links two major Airbus facilities.

With British Airways having pretty much abandoned UK regional airports except for providing feed to its Heathrow hub, regional airports are reliant either on foreign flag carriers (such as Air France, KLM, Lufthansa, Swiss), LCCs (such as bmibaby, easyJet, Ryanair, Jet2.com) or regional operators (such as City Airline, Eastern, Flybe) to provide connections to major European business centres.