This summer, Bangkok-based Nok Air celebrated its fifth anniversary. The airline operates domestic routes from the ‘old’ Don Muang airport in downtown Bangkok, which was closed between September 2006 and March 2007 as all airlines were initially obliged to relocate to the new Suvarnabhami airport. However, when Don Muang re-opened for non-connecting domestic traffic only, Nok Air returned with its fleet of brightly coloured 737-400s (and single ATR 72). The airline’s biggest shareholder (with 39%) remains Thai Airways. 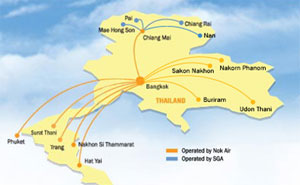 Nok Air only has one competitor at Don Muang. One-Two-GO competes head-to-head with Nok Air on four routes but operates fewer flights. It also serves Chiang Rai, which Nok Air does not.