Zadar in Croatia unaffected by downturn; traffic up 40% this year as Ryanair adds routes

In spite of having lost SkyEurope, which had a 20% share of scheduled capacity in July 2008, at the end of this year’s summer season, Zadar airport on the Croatian coast has been able to more than compensate for its demise and report a staggering 43% growth so far this year.

The airport traffic is highly seasonal, caused by the strong inbound leisure passenger flow. This winter, the airport’s only scheduled services are daily flights to Pula and nine weekly services to Zagreb; both on Croatia Airlines’ Q400s. The local Lufthansa flight school and Croatian Air Force training base do, however, also make use of the airport all year. 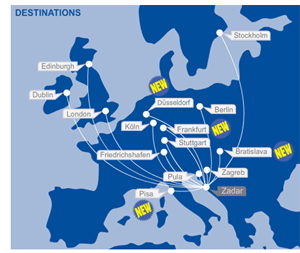 While Croatia liberalised its air services agreements toward the European Union in 2006, the large traffic boost happened somewhat later in Zadar than at other Croatian coastal airports.

Although SkyEurope had started serving Zadar from Bratislava already at the start of the summer in 2002, the major low-cost invasion started in 2007. The airlines leading this traffic surge are Ryanair and germanwings.

Other airlines serving Zadar include DanubeWings, which has reinstated Bratislava services, and InterSky, which serves Friedrichshafen. Major European countries are, however, currenly unserved from Zadar and on its Route Shop page, the airport seeks to fill routes to France, Spain, Russia, Norway and Italy.