Change has come, or at least is coming to Japan – JAL’s problems have lead to the national carrier’s announcement that it is withdrawing from a range of markets, including operations at the significant Kobe Airport. Independent Skymark Airlines is responding by making Kobe a secondary base. Skymark is not big by Japanese standards, but it is a big enough airline to grow very fast in this extensive domestic market.

The general perception about the Japanese domestic air travel market is that it is basically a duopoly involving ANA and JAL – and that’s pretty much the case. Analysis of OAG schedule data for January 2010 reveals the following market shares in terms of flights and seats in the domestic market.

Given that Japan Transocean Air (JTA) is majority owned by JAL and that Air Do codeshares with ANA, the two biggest domestic airlines have, in effect, 95% of the domestic market. Skymark Airlines, which began operations in 1998, is the largest independent carrier and transported some three million passengers on domestic flights in 2008 (or about the same Ryanair had at the start of 1997) and currently has a fleet of 12 737-800s, each equipped with 180 seats. The two most recent aircraft to join the airline did so in November and December 2009. The airline used to operate a small number of 767-300s, but these have now been disposed of.

The airline is keen to make Kobe a secondary base and in addition to the two new routes already announced, there are indications that the airline will add flights to Kagoshima, Kumamoto, Nagasaki and Sapporo before the end of the year. 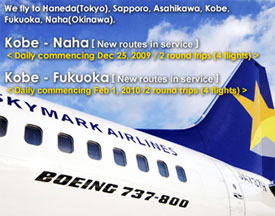 Analysis of the airline’s current (January) schedule indicates that just 12 aircraft are required to operate the flying programme. Seven aircraft appear to overnight in Tokyo Haneda, two in Kobe, and one each in Fukuoka, Okinawa and Sapporo. Only three flights (all from Haneda) depart before 07:00, while only two flights return to base after 22:00.

It is quite difficult to find out information about Skymark, but a noticeable indicator of growth provided by WASINC International is heavy advertising for “immediate openings for qualified 737 captains for Skymark Airlines to be based in Tokyo” with the advice to applicants: “Take your time – there’s plenty more coming up.”