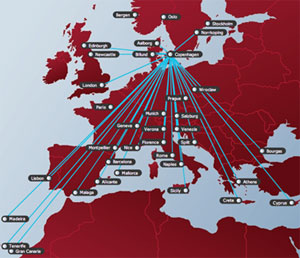 The ‘new’ Cimber Sterling, which now is just over a year old, is the result of the 60-year-old regional airline Cimber Air taking over some of Sterling Airlines’ assets, after the Danish leisure airline ceased operating in October 2008.

The new airline has an unusual combination of routes and fleets. On the one hand, the core of Cimber Sterling’s operations still are the former Cimber Air’s regional services, with 67% of the airline’s seat capacity this winter being assigned to Danish domestic services. On the other hand, the airline actively markets its new, low-frequency, low-cost leisure routes, operated with five former Sterling 737-700s.

As Cimber Air, the airline’s passenger numbers have grown during the latter half of the last decade, having experienced a slump in previous years.

With the new, expanded Cimber Sterling operations, early figures indicate a sharp increase in passengers. During the Scandinavian holiday month of July, the airline has also seen its traffic more than double, as the lack of business passengers is compensated by the new leisure passenger target market.

Although Cimber Air had flown in and out of Copenhagen since 1966, the low fare leisure segment is new to the airline. The dramatic changes to the company have required further capital and the airline has just been listed on the Copenhagen Stock Exchange in December 2009.

The airline differs from traditional LCCs in that it offers its tickets through GDS channels and provides a consistent service level throughout its route network with a complimentary snack and drink to passengers on all of its flights.

Cimber Sterling ranks after SAS Scandinavian Airlines and Norwegian in terms of capacity offered out of Copenhagen airport. The airline is, however, the biggest at domestic Danish services, with more than twice as many flights as runner-up SAS.

This winter, Cimber Sterling’s main international destination is the United Kingdom, serving Newcastle and London. During summer, Edinburgh is also served. On the highly competitive route between Copenhagen and London Gatwick, the airline recently redistributed its capacity by adding frequencies, but downsizing the aircraft on some of the frequencies from 737-700s to CRJ200s.

As of the beginning of the summer schedule, the airline will also start ten weekly services to London City Airport using ATR42s. The airline already operates the route on behalf of SAS, but as the Scandinavian major pulls out, Cimber Sterling continues the service as its own commercial operation.

As covered in anna.aero’s analysis of this winter’s ski routes, Cimber Sterling has also ventured into the ski market with routes to Salzburg, Verona and Geneva.

Ten summer routes in competition with two or more airlines

This summer, Cimber Sterling will operate 29 routes to destinations in 12 countries. Seven of these routes are operated without competition, while ten face competition from two or more airlines.