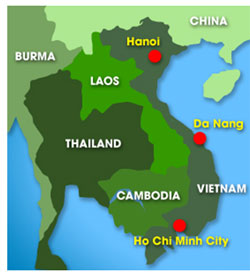 According to OAG schedule data for January, Vietnam currently has 20 airports with scheduled services. However, over 80% of flights and over 85% of seat capacity are concentrated at just three airports; Tan Son Nhat airport serving Ho Chi Minh City, Noi Bai airport serving Hanoi and Da Nang airport. These are also the only three airports in Vietnam offering international services. The remaining 17 airports offer only domestic flights (mostly to Hanoi and/or Ho Chi Minh City) and at 14 of them Vietnam Airlines is the only carrier. The only other carrier providing domestic services is Jetstar Pacific, which used to be known as Pacific Airlines. Another local carrier, Indochina Airlines, ceased operating last November.

Air traffic has grown rapidly during the last 10 years. Between 1998 and 2008, passenger numbers at the country’s two busiest airports grew from under five million to just under 20 million, helped by the growth of Vietnam Airlines.

New services started in the last two years at these main airports are summarised below. Most of the routes started have been by carriers other than Vietnam Airlines. It is worth noting, however, that this week sees the launch of a third Japanese destination (Osaka Kansai) in the last 18 months, from Hanoi by the national carrier.

A new airport, known as Long Thanh International airport, has been approved to serve Ho Chi Minh City, as the current airport is constrained by its surroundings. The master plan for the airport ultimately envisages four parallel runways and terminals able to handle 100 million passengers annually.

State-owned Vietnam Airlines dominates the domestic market, but is also a major player on international routes. From Ho Chi Minh City airport, it serves 19 international destinations including Frankfurt, Paris and Moscow in Europe, Melbourne and Sydney, plus three destinations in Japan. However, its highest frequency routes are to Phnom Penh and Siem Reap in neighbouring Cambodia. From Hanoi, it serves many of the same destinations but not Australia.

Jetstar Pacific (formerly operating as Pacific Airlines) is 27% owned by Qantas and operates five 737-400s and a single A320. It operates just six domestic routes with over 50% of capacity allocated to the key Hanoi – Ho Chi Minh City route, which it operates 11 times daily. International services are provided by Jetstar Airways to Darwin and by Jetstar Asia to Singapore.

Last week, a former CEO of the airline was arrested in Vietnam, accused of costing the airline millions of dollars in bad fuel hedges. This week, Vietnamese authorities said that investigations had revealed safety lapses at the airline and that the airline had 30 days to correct the problems cited in the report or risks losing its operating licence. Despite its link to Qantas, Jetstar Pacific remains majority (70%) owned by the State Capital Investment Corporation of Vietnam.

The leading country markets from Vietnam are all south-east Asian countries, led by Cambodia, followed by Thailand and Singapore. On routes to Singapore and Thailand, carriers such as Tiger Airways, AirAsia, Thai AirAsia and Jetstar Asia compete with the traditional national carriers. In January 2006, Tiger Airways added services to Da Nang from Singapore, but the route only lasted six months and only Ho Chi Minh City and Hanoi remain served with international LCC routes.

European markets are served non-stop by Vietnam Airlines, but also by Air France and Lufthansa (both via Bangkok) and Aeroflot (non-stop from Hanoi to Moscow Sheremetyevo). Two US carriers also fly to Vietnam. United operates via Hong Kong to San Francisco, while Northwest/Delta serves the US market via its hub at Tokyo Narita. Of the ‘MEB3′ airlines, only Qatar Airways operates to Vietnam (Ho Chi Minh City) with four weekly flights from Doha.