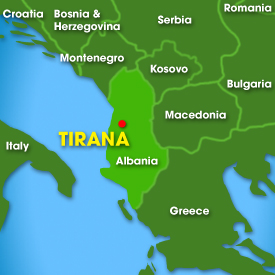 Not many airports with over one million annual passengers have been able to report double-digit growth in both 2008 and 2009, but Tirana International Airport in Albania is one of them. The country, on the opposite side of the Adriatic from the heel of Italy, has the Former Yugoslav Republic of Macedonia, Greece, Montenegro and Kosovo as neighbours. It is similar in size to Belgium but with a population of just over three million people. The airport is currently managed by a consortium lead by Hochtief AirPort of Germany.

Traffic has been boosted in recent years by the arrival of Belle Air, a low-cost airline that started operations in November 2006. It operates to around 20 destinations (nearly all in Italy, plus Zurich) using a fleet of five aircraft, including two A320s, one A319, one MD82 and one ATR 72-500. According to the airport, Belle Air was by far the busiest airline at Tirana in the first nine months of 2009, accounting for 42% of passengers. This is well ahead of Alitalia (13.5%), Albanian Airlines (8.9%), Austrian (6.0%) and Turkish Airlines (5.3%).

Demand to and from Albania peaks in August. Despite the recent growth, the seasonality profile has remained remarkably consistent for the last three years.

For passengers outside of Italy there are a number of carriers providing non-stop flights to the Albanian capital. These include Adria Airways (to Ljubljana), Aegean Airlines (to Athens), Austrian (to Vienna), British Airways (to London Gatwick), germanwings (seasonal services to Cologne/Bonn), Lufthansa (to Munich), Malev (to Budapest), Olympic (to Athens) and Turkish Airlines (to Istanbul).

According to the airline’s website, Albanian Airlines has been under the ownership of the Azerbaijan-based Evsen Group since last August. The airline’s booking tool suggests that flights are currently on sale to Bologna, Frankfurt, Istanbul, London Stansted, Milan Malpensa and Turin. The website also indicates that the airline soon is hoping to operate a fleet of two 747-400s, two 757-200s and four 737-300s and plans to start services to several new destinations, including Berlin, Jeddah, Madrid, Paris and Rome. The acquisition of some Fokker 100s has also been indicated on the airline’s website. Anna.aero will be following the airline’s development with interest to see if it can usurp Belle Air as the country’s leading airline.