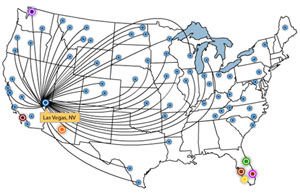 Despite offering more non-stop destinations from Las Vegas than any other airline (Southwest excepted), Allegiant Air’s extensive network, involving some 40 cities, is offered at such low frequency (typically two to three weekly flights in winter and three to four weekly flights in summer) that the number of passengers the airline carries through the airport fails to rank it in the top five. However, during the first 11 months of 2009, Allegiant’s passenger numbers were up 7.8% at McCarran, while traffic for all carriers combined was down 8.7%. Because Allegiant has been growing rapidly at other bases, the share of the airline’s network that is based around Las Vegas has fallen from almost 70% in 2006 to around 30% in 2009. However, Fayetteville (XNA) was introduced as a new route in early June.