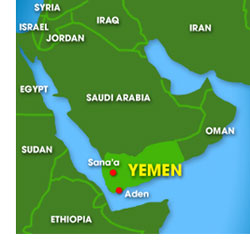 The Republic of Yemen, with Saudi Arabia and Oman as its neighbours, is the size of Spain with a population of 23 million people. According to OAG, the country has 10 airports offering scheduled services, though three of these have less than one daily flight on average. The busiest airport by far is Sana’a, which serves the nation’s capital. Between 1999 and 2007, passenger numbers at the airport have doubled from three-quarters of a million to just over one and a half million.

anna.aero has this week been in contact with official sources in Yemen and will soon be able to update the passenger numbers with data from even more recent years. Check this page soon again for the most up-to-date information from this emerging market.

International traffic accounts for around 80% of passenger numbers at Sana’a. The country’s next two busiest airports are Aden (a port city run by the British until the late 1960s) and Riyan Mukalla.

In late October 2008, Felix Airways began domestic operations with CRJ 700s. It now operates two CRJ 200s and two CRJ 700s and is part-owned by Yemenia. According to OAG data for January, the airline operates almost 150 weekly departures, including international flights to Djibouti (started on 6 May 2009) and Sharjah (started 22 April 2009). However, according to the airline’s website, it also began service to Medinah in Saudi Arabia on 15 November 2009 and followed this up with flights to Dammam from 26 November. Regional operations began in April 2009 with the introduction of flights to Salalah in Oman.

Yemenia return to (some parts) of Europe

Yemenia with its current fleet of three A310s, two A330s, four 737-800s and Bombardier turboprops is experiencing difficult times. Last June, an A310 crashed killing almost everyone on board and last October, all flights to Europe (Frankfurt, London, Paris and Rome) were suspended. These were re-started in mid-December, though UK flights were again suspended earlier this month by the UK government over security concerns.

Apart from serving the domestic market and regional markets such as Egypt, Ethiopia, Saudi Arabia and the UAE, Yemenia also operates to India (Mumbai). Last year, Yemenia ordered 10 A320s, to add to a previous order for 10 A350s.

Apart from Felix Airways and Yemenia, a number of foreign carriers operate flights to and from Yemen. Emirates, Gulf Air and Qatar Airways (but not Etihad) each provide service to its home base, while Egyptair (Cairo), Royal Jordanian (Amman) and Saudi Arabian (Jeddah and Riyadh) also serve the country.

Local LCCs Air Arabia and Jazeera operate from Sharjah and Bahrain respectively to Sana’a. Other airlines serving Sana’a include Turkish Airlines with four-weekly flights to Istanbul and Lufthansa, which currently operates to Frankfurt via Addis Ababa four-times weekly. This routing will soon be changed to operate via Jeddah instead.