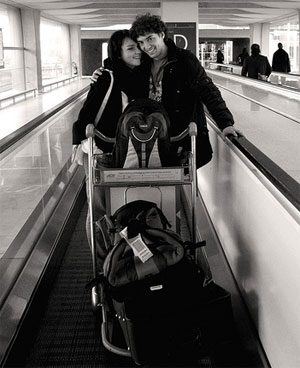 With Valentine’s Day (14th February) this year falling next Sunday, there is an opportunity for lovers of all things romantic to book a ‘surprise’ trip for their loved ones without having to worry about taking (much) time off work. For true romantics the only destinations to consider are in Italy with Rome and Venice undoubtedly the two most popular getaways.

This week, anna.aero conducted a fare analysis on behalf of people with access to London’s airports who want to fly out ideally on Friday evening (12th February), returning as late as possible on Sunday evening (Valentine’s day itself).

With London, Rome and Venice all served by more than one airport there are several different ways of getting from London to the Italian cities. British Airways, easyJet and Ryanair all serve both city-pairs while Alitalia serves the London-Rome market. 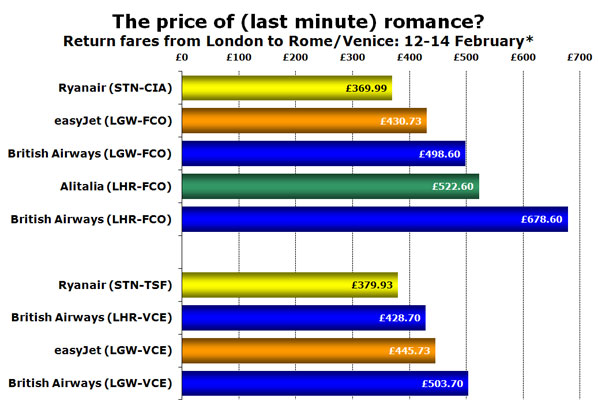 As a result of leaving it rather late to book these flights, on some of the services the outbound flights either had to take place on Friday morning (requiring time off work) or early on Saturday morning. The table below clarifies which flights were used to come up with the fares illustrated.

Ryanair has four departures from Stansted on Friday 12th but all four depart the airport before 13:00 requiring passengers to take a day off work. As a result the early morning Saturday flight was used in our analysis instead.

To get sensible fare data from Alitalia took a while, as initially the website kept offering flights via Milan (even though there are five daily non-stop flights). Eventually, the “advanced search” option was required to specify the preferred flight times and a preference for “Nonstop flights only”.

With fewer daily flights to Venice, the only airline still selling seats for Friday evening flights was Ryanair. BA’s single daily Heathrow – Venice flight operates in the morning, while their Friday afternoon and evening Venice flights from Gatwick were sold out, as were all Saturday flights.