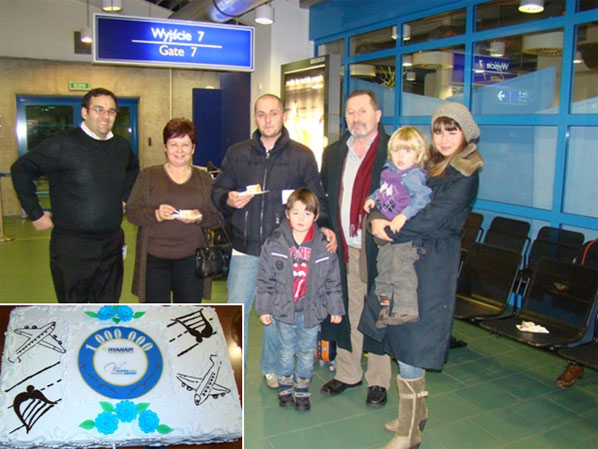 On 2 February, Ryanair celebrated its millionth passenger at Gdansk Lech Walesa Airport. Paul Rzepinski, who lives in Krefeld in Germany, was given a Ryanair voucher, and – most importantly – a piece of cake (inset). He is here seen with his family and Ryanair’s Laszlo Tamas (far left). The same day, Ryanair took the opportunity to announce a new route to Girona in Spain from Gdansk.

Gdansk in northern Poland (famous for its shipyard and the birthplace of the Solidarity trade union that changed the course of Polish politics in the early 80s), has seen its airport traffic grow from 365,000 passengers in 2003 (the year before Poland joined the European Union) to almost two million in both 2008 and 2009. This rapid growth has been driven by low-cost carriers, notably Ryanair and Wizz Air, though for once it is the Central European carrier that has a dominant presence at the airport, having started operations in August 2004. It based its first A320 there in March 2006, a second in July 2007 and a third last December. It now serves 18 destinations, though only Dortmund, London (Luton) and Stockholm Skavsta are served at least daily. 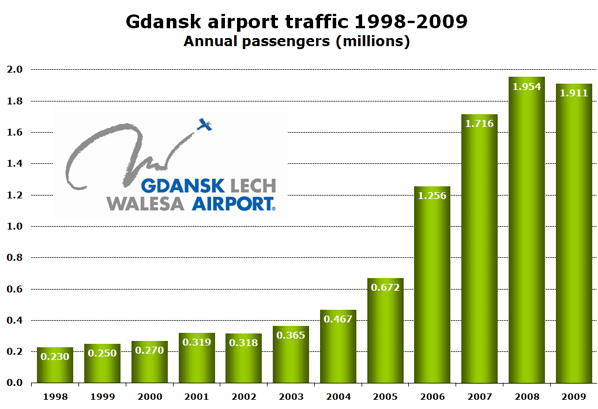 According to the airport’s own figures, last year Wizz Air carried almost 820,000 passengers to and from Gdansk, followed by Ryanair (325,000) and LOT (312,000). The only other scheduled carriers currently serving the airport are Lufthansa (to Frankfurt and Munich), Norwegian (to Oslo) and SAS (to Copenhagen and Oslo). Famous people visit Gdansk airport, of course including Lech Walesa himself, after whom the airport is named.

Not all low-cost services have been a success. easyJet began four UK routes in October 2007, all of which had been abandoned by June 2008, and bmibaby began two UK routes in April 2008 and lasted less than two months. This helps explain the relative dip in traffic from June 2008 onwards. 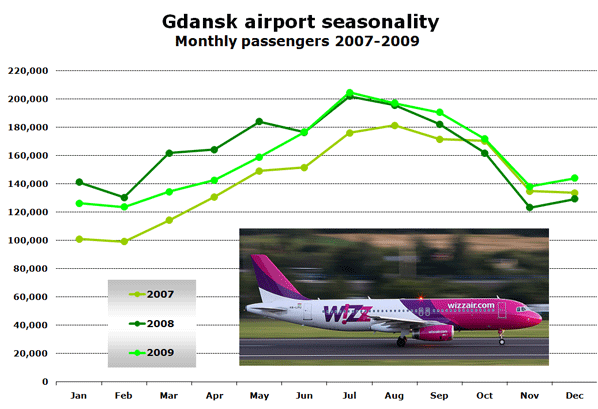 Even Ryanair has dropped routes from Brussels Charleroi, Liverpool and Shannon. Wizz Air has only dropped three routes so far and two of those were to UK destinations (Bournemouth and Coventry). The following table lists low-cost services started since mid-2007.

Ryanair is adding two more destinations to its current network of 11 with the addition of Oslo Rygge (from 31 March) and Girona (from 3 May). Lufthansa, having only begun Frankfurt flights in March 2008, is adding a daily Düsseldorf flight from the start of the summer season.

Two airports no longer served are Hamburg (LOT flights were discontinued in 2008) and Helsinki (Finnair ended flights in October 2008).

Warsaw remains the airport’s busiest route in terms of individual airports, but London is the dominant city destination though traffic is split across Luton (Wizz Air flights) and Stansted (Ryanair flights). Warsaw and London flights combined account for over one in every four passengers. Apart from Warsaw, no other Polish destinations are served non-stop. 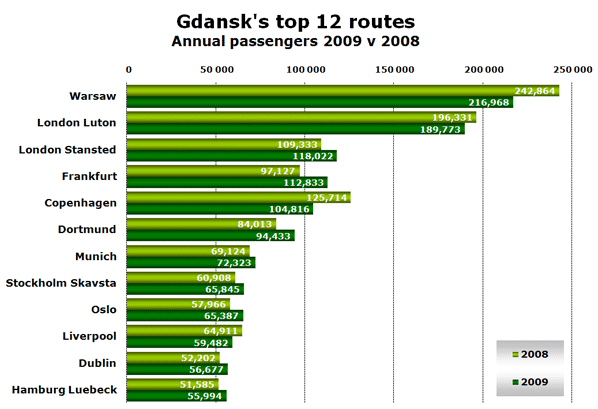