Spain’s domestic air travel market is coming under increasing pressure from the on-going expansion of the AVE high-speed rail (HSR) network. The first line was opened as far back as 1992 between Madrid and Seville (to coincide with Seville hosting the Expo that year) and has recently been extended in all directions from Madrid. In 2007, the network reached Malaga and in February 2008, the final section needed to connect Spain’s two biggest cities was completed enabling high-speed rail journeys to and from Barcelona.

An analysis of air traffic demand since 1999 from Madrid to the top 10 domestic destinations clearly reveals the dominance of the Barcelona route, and also the impact of the growing HSR network. 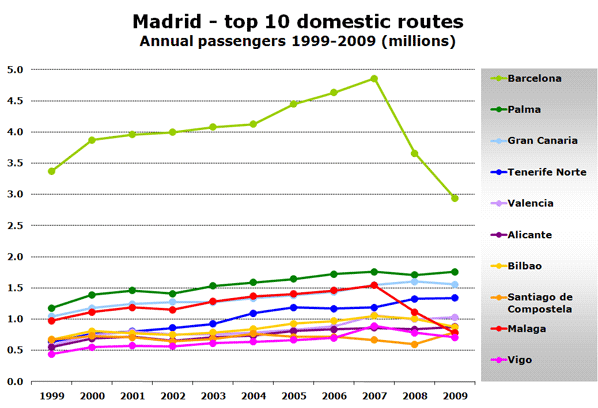 In 2007, passenger numbers between Barcelona and Madrid peaked at almost five million. Last year, this figure had fallen by 40% to just under three million. No other domestic route from Madrid caters for more than two million annual passengers. The next three busiest routes are all to island destinations (Palma, Gran Canaria and Tenerife Norte) and are therefore unlikely to ever face competition from rail services.

Malaga traffic down 50% in two years

A better way to see the relative performance of the individual routes is to look at the figures on an index basis, using 1999 as the base year. 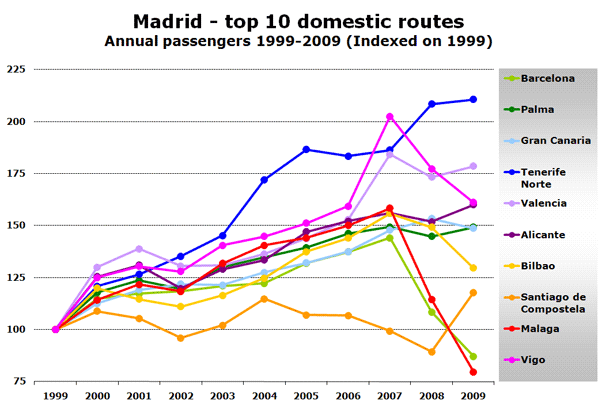 The sudden upturn in traffic on the Madrid – Santiago de Compostela route in 2009 can be attributed to the arrival of Ryanair on the route in November 2008. Previously, the route was dominated by Iberia with around 40 weekly departures with Spanair offering just a single daily flight. Ryanair started the route with two daily flights which has gradually been increased to three. As a result, traffic grew by over 30% in 2009. Ryanair also started daily flights from Madrid to Alicante, Palma and Valencia in November 2008, all routes which reported traffic growth in 2009.

The spike in Vigo’s development is explained by Air Europa entering the market in 2007 to take on Iberia and Spanair. In 2008, Spanair cut its frequencies and last summer it pulled off the route completely.