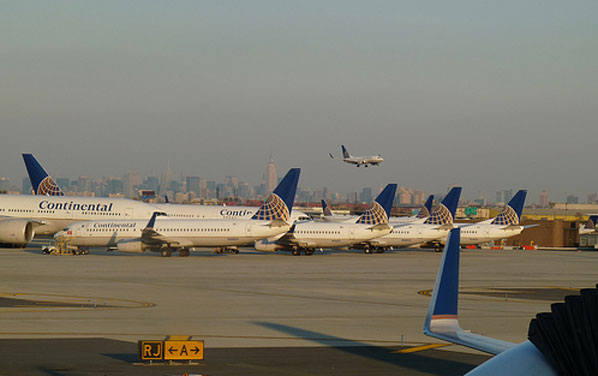 Continental (and affiliates) biggest in Big Apple with 25% market share.

New York’s three main airports handled just over 100 million passengers in 2009. New York JFK handled around 46 million, Newark around 33 million and LaGuardia 22 million. However, thanks to its dominance at Newark, where it and its partners account for around 70% of all capacity, Continental is the busiest carrier in the New York area. According to figures in the Port Authority of New York and New Jersey’s (PANYNJ) statistical review of airport data, Continental alone transported 20.73 million passengers through the three airports in 2008. If Continental Express services operated by ExpressJet and Colgan Air are included the figure rises to over 25.6 million.

Continental has three major hubs in the US. Houston is by far the biggest in terms of flights and seat capacity followed by Newark and Cleveland. However, in terms of international destinations served Continental serves almost as many from Newark as it does from Houston.

According to 2008 data of the 30 top domestic markets from Newark, Continental is the leading airline in 24 of them. Only the routes to Atlanta (Delta), Charlotte (US Airways), Dallas/Ft Worth (American), Detroit (Northwest), Minneapolis/St Paul (Northwest) and St Louis (American) were not dominated by Continental.

Another interesting detail from the PANYNJ data analysis for 2008 is that on routes to Florida, Hawaii and Puerto Rico between 65% and 70% of traffic is originating at the New York end of the route.

Not surprisingly routes to Canada dominate the rankings of the leading international routes by weekly frequency, taking the top four places, with Halifax in eighth place. The leading transatlantic service to London Heathrow (which only began in 2008 when the airline finally gained access to the airport) will see frequencies increase from the current three daily flights to four from March, followed by a fifth in October. 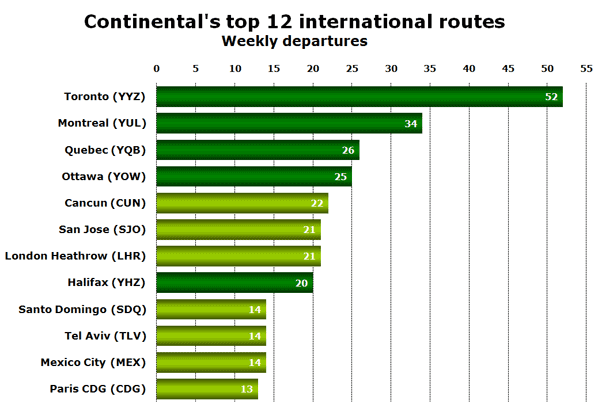 All of the routes dropped were served no more than twice daily while the four new domestic routes added have all been introduced with at least three daily services to maximise connecting opportunities.

Having recently converted to the Star Alliance Continental is starting a daily service to Munich from the beginning of the summer season at the end of March. Onward connections to a range of destinations will be available thanks to Star partner Lufthansa’s extensive network from the Bavarian airport.