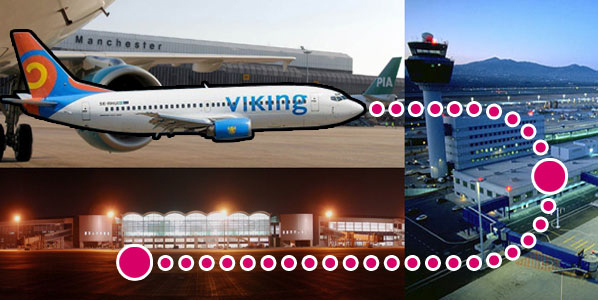 Can you tell which airport is which? The big, modern Erbil airport in Iraqi Kurdistan (bottom picture) discards any prejudice you may have had about Iraqi airports.

On 5 February, Europe saw the start of a new airline. The charter airline Viking Airlines, headquartered in Sweden but primarily based in the UK, has set up a new Greek subsidiary named Viking Hellas, which had its first flights at the end of last week.

The two weekly services now started from Athens, to Manchester in the UK and Erbil in Iraq, are scheduled in order to target the Manchester-Erbil market. From March, two further weekly destinations in Iraq will be added to the airline’s network; Baghdad and Sulaymaniyah. The frequency on the Manchester route will then be increased to thrice-weekly, again providing connections in Athens onward to Iraq.

The airline’s parent company Viking Airlines already operates from the UK to Iraq in a similar manner. Connections are offered from London Gatwick to its services from Stockholm Arlanda to Erbil, Sulaimaniyah, Baghdad and Najaf, while flights are operated from Birmingham to Malmö in order to connect onward from there to Erbil and Sulaymaniyah.

The one aircraft registered with the airline, an ex-Viking Airlines MD-83 based in Athens, is only to be used as a back-up, while the core of Viking Hellas’ operations in the beginning will be operated with Viking Airlines’ Swedish-registered fleet of 737-300s and 737-800s out of Manchester. The airline is in the process of acquiring two A320s, one of which will take over the scheduled operations and the other which will operate charter flights out of Heraklion in Crete. 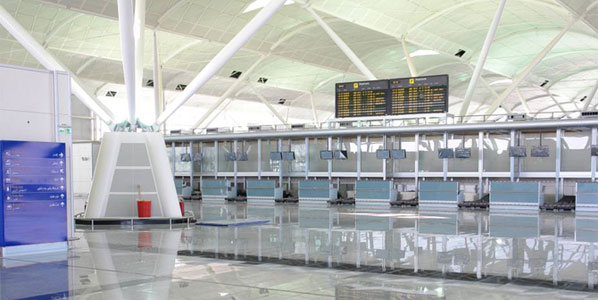 The shiny Erbil airport will soon be full of passengers fed through Viking Hellas’ Athens base. (Thanks to Haval S. Mezori at Erbil airport for the photos.)

Although the UK Iraqi Association estimates that between 300,000 and 400,000 Iraqis live in the UK, the only direct traffic recorded between the UK and Iraq during 2009 was on four charter flights, all to Erbil; three from London Stansted and one from London Luton, in total carrying 542 passengers. The previous year, there were no flights at all reported by the UK CAA.

Manchester-Athens is already served by easyJet, which saw over 35,000 passengers on the route in 2009. Viking Hellas’ fares on the route are therefore set low, starting at £59. UK-Iraq services, which are scarcer, are normally offered from £545 return, but at the moment from as low as £398.

The resurrected Iraqi Airways may provide serious competition to the current stopping services if its plans to start a Baghdad-London service materialises. The airline is, however, currently unable to give a start date for the route, which has been postponed from its initial launch date in August 2009.