V Australia launched a twice-weekly service from Brisbane to Phuket in November. V Australia is the only airline to fly the route, which is operated using the airline’s 777-300ER aircraft configured in three classes. 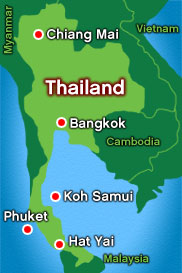 Between 1998 and 2007, passenger traffic at the country’s international airports almost doubled from 30 million to 55 million. The dip in traffic in 2003 is explained by the impact of the SARS outbreak that year which affected air travel in many parts of Asia.

In 2008, passenger numbers were down around 5% in total, though Phuket’s leisure oriented traffic managed to grow by almost 1% and traffic at the downtown Don Mueang airport was up 5%. Koh Samui airport reported 15% growth in demand to 1.365 million passengers. 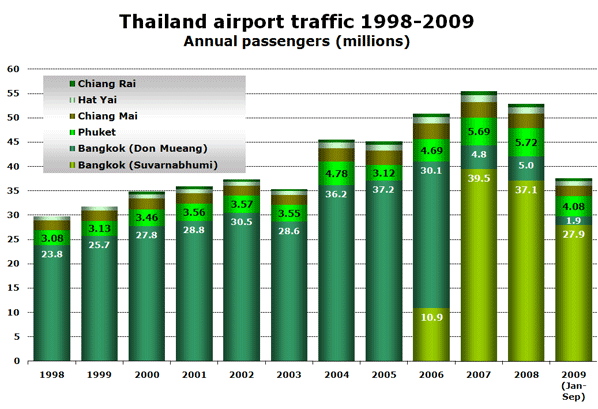 Bangkok’s airports have consistently maintained an 80% share of the total traffic throughout this period which saw the majority of traffic move from the downtown Don Mueang airport to Suvarnabhumi in 2006. Don Mueang has been kept open for domestic point-to-point services and is used by both Nok Air (for 10 routes) and Orient Thai Airlines (five routes). Traffic at Suvarnabhumi is split roughly 3:1 in favour of international traffic.

The 35% drop in Phuket’s traffic in 2005 was the result of the tsunami which struck the region on 26 December 2004 and caused extensive damage to tourism infrastructure on the island.

Kingfisher began daily flights to Bangkok from Kolkata in August. The service represented the first appearance of the Indian carrier in the Thai market.

Thailand has a healthy domestic market with competition on many of the major routes. The national carrier Thai Airways has the highest capacity thanks to its use of large aircraft on trunk routes. Air Asia’s Bangkok-based subsidiary began operations on 1 February 2004 while Nok Air (part-owned by Thai Airways) has been operating since July 2004.

The busiest domestic route in terms of weekly frequencies is Bangkok to Phuket, which offers 170 weekly departures spread across Bangkok Airways, Thai AirAsia and Thai Airways. The Bangkok to Chiang Mai route is also served by the same three carriers offering over 100 weekly departures in total. The island of Koh Samui is also served with over 100 weekly flights, mostly operated by Bangkok Airways who originally built the airport.

56 countries served but just one service to the US

A total of 56 countries can be reached non-stop from Thailand’s airports. Bangkok’s Suvarnabhumi airport is one of the major Asian airport hubs handling almost 40 million passengers in 2007. No single country dominates the international air traffic market but northern neighbours Cambodia, Laos and Myanmar fail to make the top 12. 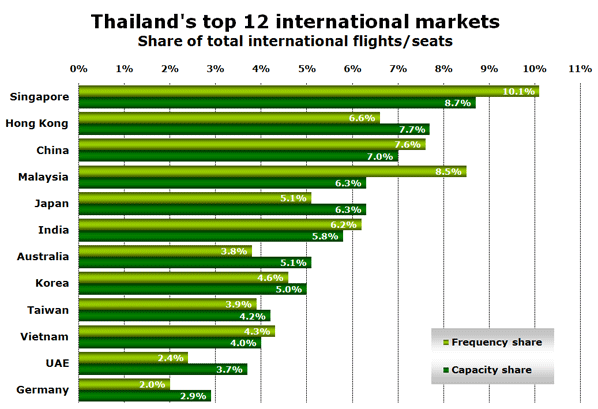 The only non-stop service to the US is Thai Airways’ daily flight to Los Angeles. All three ‘MEB3’ airlines serve Bangkok with at least double-daily flights while European carriers present include Austrian, Air France, British Airways, Finnair, KLM, Lufthansa, SAS and Swiss. Among the more niche services is a weekly Air Koryo flight to Pyongyang in North Korea.

Australia is well served by Australian carriers from both Bangkok and Phuket. Qantas serves Bangkok from Sydney while Jetstar operates from Melbourne. V Australia started Brisbane and Melbourne services to Phuket at the end of 2009, while Virgin’s Pacific Blue operates from Perth and Jetstar from Sydney.

The leading European market is Germany, which is served, as might be expected, by Lufthansa and Thai Airways, but also by airberlin. When airberlin took control of LTU it acquired a long-haul fleet and now serves Bangkok from Berlin, Düsseldorf and Munich as well as Phuket from Berlin and Munich. With 13 weekly departures it offers almost twice as many flights as Lufthansa. 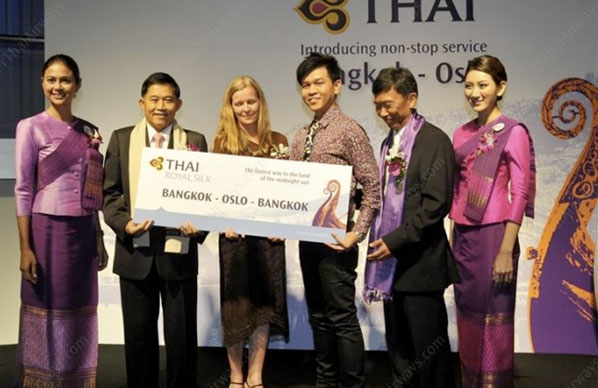 The Thai Airways service to Oslo was among the new international services launched from Bangkok in 2009. There are five-weekly departures operated using a 215-seat A340-500.