The right size for the market: Adria is a loyal operator of Bombardier’s CRJ and these now comprise the entire fleet, although it does have a single A320 (which we notice is currently on lease to Libya's Afriqiyah). 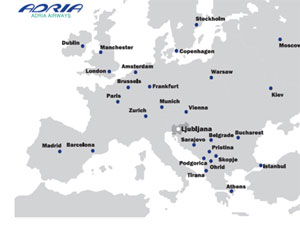 The only Slovenian scheduled airline, Adria Airways, is now a full member of Star Alliance, after the regional membership status (which the airline had had since 2004) was abolished at the beginning of this year.

The country’s small size and population of only two million make domestic flights unviable. All of Adria’s flights therefore operate in and out of its hub at the capital city Ljubljana (LJU), situated between the Alps and the Mediterranean Sea. 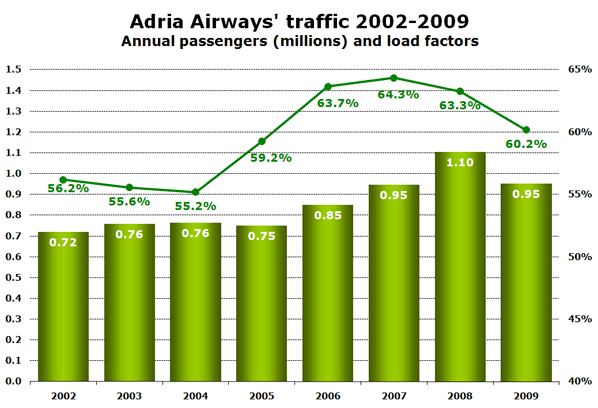 Slovenia’s entry to the European Union in 2004 did not give an immediate boost to Adria’s passenger numbers. Load factors did, however, start to rise in 2005. From 2006, passenger numbers have also been on the rise and in the record year of 2008, Adria transported over a million passengers. However, last year, numbers were down to the 2007 level, while capacity increases over the last couple of years have dragged load factors down.

Adria is addressing this overcapacity by downsizing its aircraft. Two of its three A320s have already been disposed of and will be replaced by two new 135-seat A319s at the end of April. The remaining Adria fleet consists of Bombardier CRJs; seven CRJ200s and four CRJ900s. An order for a single CRJ1000 has been converted to another CRJ900. The airline’s maintenance subsidiary is also a major maintenance provider for CRJs with more than half of its work being performed on other airlines’ aircraft. 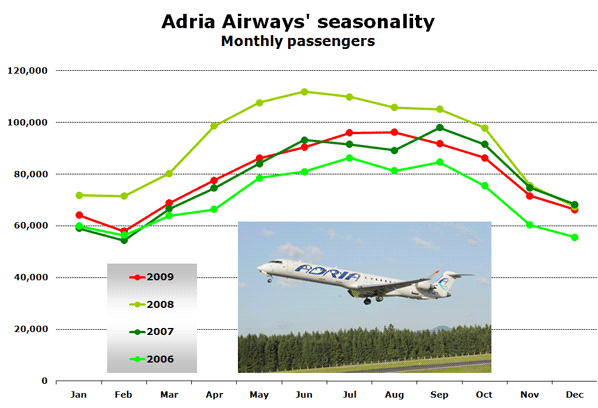 In spite of a peak to off-peak ratio of 1.66, Adria experiences a relatively even flow of passengers during the summer half of the year, notably having lost its previous August trough over the last two years.

Between 7 and 20 April, Ljubljana airport will be closed for runway renovation works and Adria has chosen to relocate its operations to Maribor (MBX) airport a 130-kilometre drive away. It remains to see how great the impact on the airline’s traffic will be. 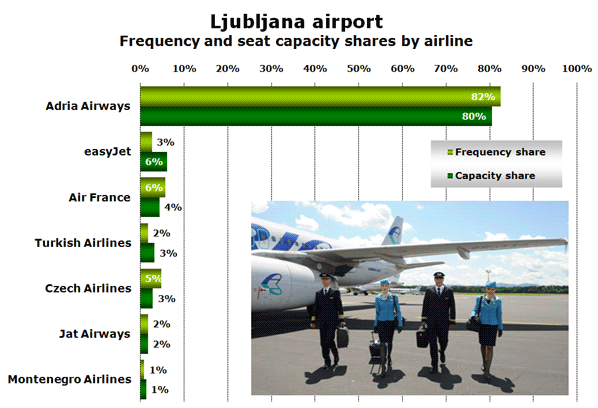 Adria hugely dominates traffic at Ljubljana airport, with over 80% of both frequencies and capacity. There has been no invasion of either low-cost or network carriers, as has happened in the other countries that liberalised and joined the EU in 2004. Only six other airlines serve Ljubljana. The only low-cost carrier is easyJet, with six weekly flights from London Stansted. Previous low-cost attempts were on Wizz Air from both Brussels Charleroi and London Luton. Both routes started in May 2006, but Luton was dropped the following February, while the Charleroi service lasted until March 2008.

Focus on feeding Star Alliance hubs and the Balkans 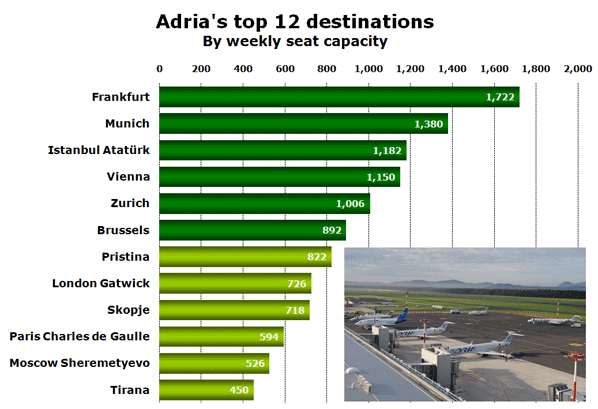 Adria Airways’ network focuses on major European cities and regional destinations in the Balkans. Notably, an entire 11 of its destinations are home airports for fellow Star Alliance carriers. In addition to the Lufthansa Group and Turkish Airlines hubs that make it to the top list of Adria’s destinations this winter (dark green), Adria serves Warsaw, Copenhagen, Stockholm, Barcelona and Madrid. As Aegean Airlines joins the alliance, Athens will be yet another airport where the small airline Adria can offer its passengers connections to a greater, worldwide network.

Over the last two years, Adria Airways has added five routes to its network, all served by its CRJ900s; Athens, Stockholm Arlanda, Bucharest Otopeni and Oslo were launched in 2008, and one new destination, Madrid, in 2009. Since then, both Bucharest Otopeni and Oslo have been dropped along with Ohrid. Athens, Madrid and Barcelona have also been temporarily downgraded to be operated during summer season only.

On 1 March this year, the airline will add another important regional destination by restarting services to Belgrade, six times weekly, after not having served the city regularly since 1991, after Slovenia had gained independence from Yugoslavia and Belgrade no longer was its federal capital.