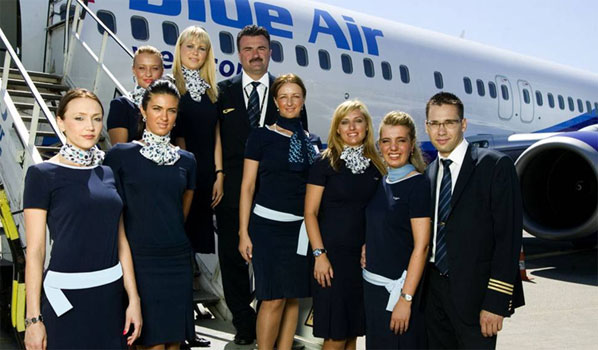 Proud to offer the lowest fares between Vienna and Bucharest: Blue Air’s crew serve the Austrian capital 11 times a week from the airline’s Bucharest Baneasa base.

Last week, NIKI became the latest carrier to offer regular scheduled services between the capitals of Austria and Romania, Vienna and Bucharest. This week’s exclusive anna.aero farewatch compares fares as of 13 February for someone wishing to travel from Vienna to Bucharest (and back) and staying for two nights, departing on each day for the remainder of February.

On its website, Austrian offers up to five daily flights, but two of these are operated by TAROM as a code-share. Only flights operated by Austrian were used when looking at the cheapest available fares in this analysis. Blue Air and TAROM both operate up to two daily flights; Blue Air to Bucharest Baneasa and TAROM to Bucharest Otopeni. Newcomer NIKI offers just six weekly flights (daily except Saturday), so two-night trips involving departures on Thursdays and Saturdays were not possible. 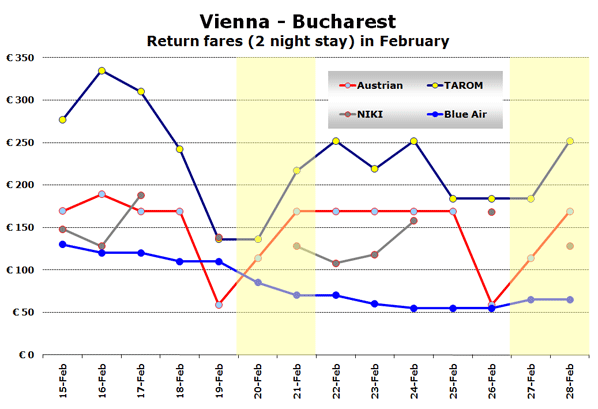 The snapshot of data shows that Blue Air is almost always cheapest. However, the fare data shown for Blue Air does not include a €20 surcharge for one piece of hold luggage on both the outbound and return sector. However, for a two-night trip, many passengers may feel comfortable just taking hand luggage. TAROM is nearly always the most expensive option. Thanks to offering the greatest frequency, Austrian has some cheaper fares on its mid-day rotation, helping the less time-sensitive traveller.