Latest figures from the Civil Aviation Administration of China reveal that China’s airports handled almost half a billion passengers in 2009. A total of 486.1 million passengers passed through 166 airports, an increase of 19.8% over 2008. This follows growth of 16.8% in 2007 and more modest growth (during Olympic year) of ‘just’ 4.7% in 2008. Traffic at Beijing Capital International Airport surged 16.9% to reach 65.4 million last year, raising its global ranking from eighth to third. Only Atlanta (88.0 million) and London Heathrow (65.9 million) now lie ahead. Second place looks assured in 2010 but passing Atlanta may take a few more years. 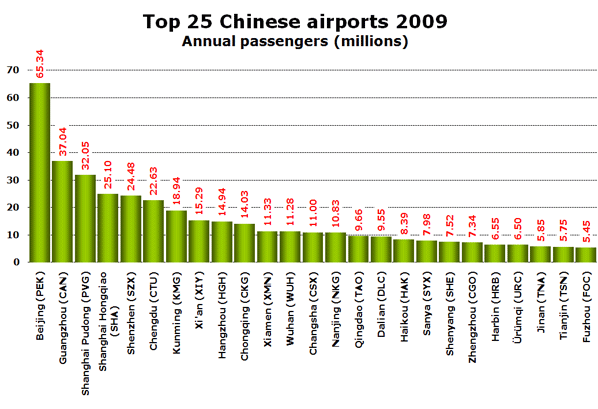 A previous analysis of China’s top 12 airports revealed how none of the airports were completely dominated by any one of the three main local airlines; Air China, China Eastern and China Southern. These three airlines between them now operate over 800 aircraft and last year took delivery of 69 from Airbus (41) and Boeing (28) with China Southern (31) receiving the most new aircraft followed by China Eastern (21) and Air China (17). According to ch-aviation six other local airlines have over 50 aircraft in their fleet led by Shenzhen Airlines (87) and Hainan Airlines (70), mostly comprising a mix of Airbus and Boeings.

The ‘odd one out’ of the remaining airlines is Tianjin Airlines whose fleet of 63 aircraft consists of 20 Embraer E190s, 16 Embraer ERJ 145s and 27 Dornier 328s. With this all-regional fleet its average aircraft size of just over 70 seats is well below the 120-160 average seat range achieved by the other major Chinese airlines.

12 domestic routes have over 20 daily departures; train is a potential threat Air China has a 27% share of flights across the country's top 12 routes, compared to 21% for China Southern and 19% for China Eastern. Peizhi Liu, secretary of Air China, is pictured leading the lavish celebrations which marked last month's launch of the new Beijing - Zhanjiang route.

China’s busiest domestic air route in terms of weekly departures is, maybe not surprisingly, between Beijing and Shanghai. With over 35 daily departures spread across five airlines it has 35% more weekly flights than the next busiest route from Beijing to Chengdu. A potential threat to the on-going dominance of this route may come from the opening of a high-speed rail (HSR) link between the two cities currently expected some time in 2011 or 2012. This would cut the 1,300km rail journey from around 10 hours to just four. Last December a high-speed rail line opened between Guangzhou and Wuhan cutting rail journey times on the 1,000km route from 11 hours to just three. 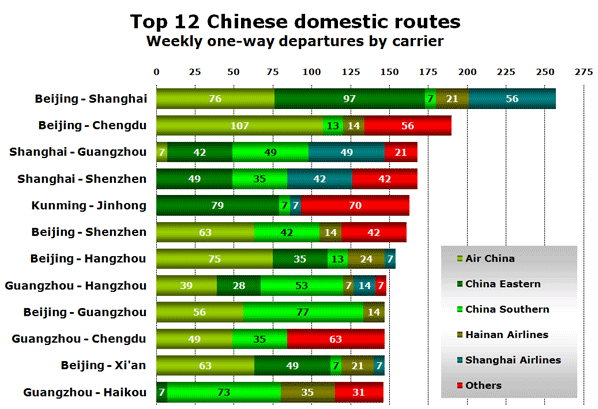 Across these top 12 routes Air China has 27% of flights, China Southern 21% and China Eastern 19%. Shanghai Airlines and Hainan Airlines each have less than 10% of the market while other carriers account for the remaining 17%, although signs of consolidation in this refreshingly competitive giant market include the on-going merger between China Eastern and Shanghai Airlines which will give the combined airline a greater than 50% share of flights on the top three domestic routes involving Shanghai.