German airport traffic up in November and December; Memmingen and Weeze both grow over 50% thanks to LCCs Weeze Airport – which reported annual passenger growth of almost 60% for 2009 – welcomed German Chancellor Angela Merkel in August, where she spoke in front of more than 2,000 people in the airport terminal. Delighted about the attention, Weeze airport’s MD Ludger van Bebber and owner Herman Buurman (who is Dutch, not German) presented ‘Angie’ with a flower bouquet.

The latest available traffic data for German airports shows that passenger numbers in December were up over 2% year-on-year, despite the snowstorms at the end of the month that affected many airports across Northern Europe. Seven of Germany’s top 10 airports reported increased traffic, the exceptions being Hannover, Nuremberg and Stuttgart. Across the 25 airports monitored by ADV, airport traffic for the year was down 4.6% to 182.2 million passengers. 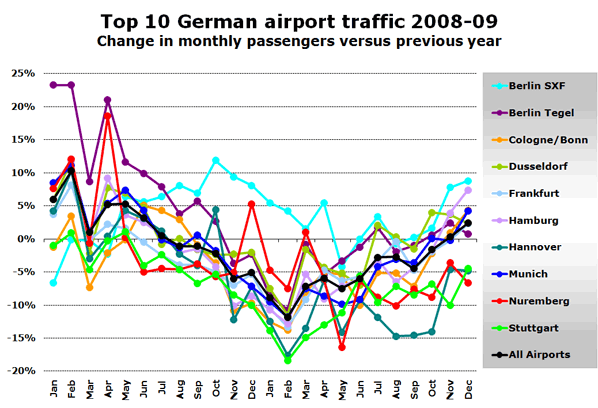 Berlin Schönefeld reported the best performance among the top 10 airports for eight of the 12 months of 2009. It was the only top 10 airport to report growth for 2009 as a whole with passenger numbers up 2.4% to just under 6.8 million.

Among smaller German airports, Weeze (near Düsseldorf) reported annual growth of 57.6% to 2.4 million passengers while Lübeck (near Hamburg) saw passenger numbers surge by 28.8% to 688,000. The relatively new airport at Allgäu-Memmingen (west of Munich) saw demand increase by 76% to 812,000 thanks to a raft of new routes from Ryanair, TUIfly and Wizz Air.

Looking at German airport traffic for the last 15 years, it clearly shows how Munich has established itself as the second major hub among Germany’s airports. In 1995, Munich and Düsseldorf had almost the same level of traffic, but by 2009 Munich was almost twice as busy. 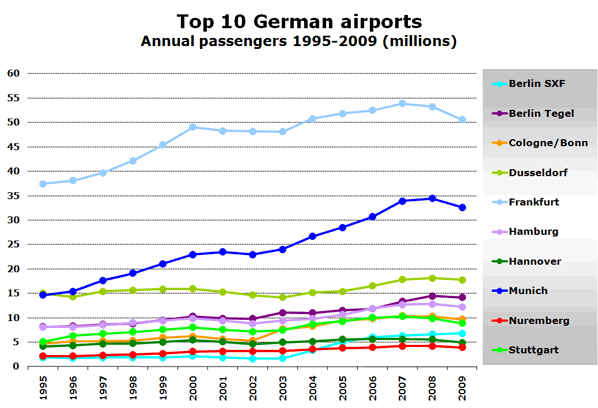 To compare growth rates since 1995, the following graph shows passenger numbers indexed on 1995. This clearly shows the dramatic growth of Berlin Schönefeld (a major easyJet base and also a germanwings base), and the surge in traffic at Cologne/Bonn after 2002 when both germanwings and Hapag Lloyd Express (hlx) established low-cost bases at the airport in 2003. 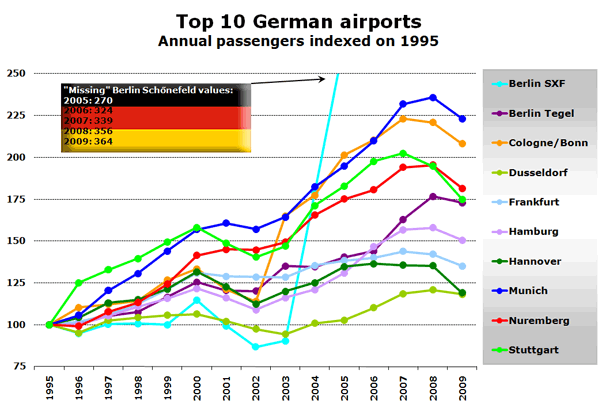 In 14 years, traffic at Düsseldorf and Hannover airports has grown by less than 25% (less than 2% per annum on average), though Hannover should see an upturn in fortunes this year with the decision by germanwings to base two aircraft at the airport at the end of April and start 15 new routes. Flybe is also starting a new direct service to Hannover from Newcastle from 31 March.