LAN prospers in South America; #1 domestically in Chile and Peru; San Francisco to be 4th US gateway from 1 July 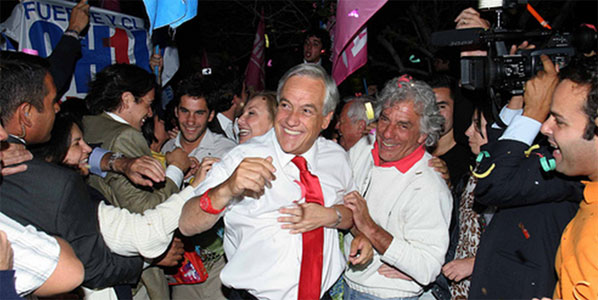 The Chilean president elect Sebastián Piñera has caused controversy by holding a 27% stake in LAN when he won the election last month. The LAN share price rose by 137% upon the news of his victory. In order to avoid conflict of interest, the future president will now sell his stake in the airline.

LAN Airlines, based in Chile, continues to report impressive growth and profits. In 2009, passenger numbers were up 16.3% to 15.4 million (though ASKs were up only 10.2%), while passenger load factor was just under 77% for the second consecutive year. The consolidated LAN group of airlines comprises LAN in Chile, LAN Argentina, LAN Ecuador and LAN Peru. All subsidiaries share the same website and the airline is a member of the oneworld alliance.

From airports in Latin America (as defined by OAG), LAN operates just under 3,000 weekly departures. This ranks it the fourth busiest airline in the region. 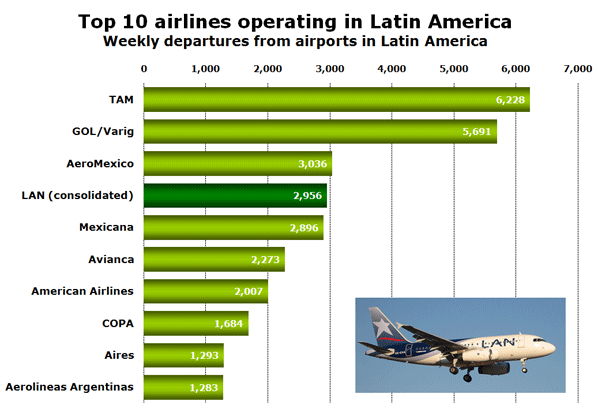 Dominant in two domestic markets; significant share in two others

LAN has a dominant position in both the Chilean and Peruvian domestic markets with 70-75% of scheduled capacity. In Argentina, it now has around one-quarter of the market (and ranks second), while in Ecuador it has 15% of the market and ranks fourth, despite only starting services in April 2009. 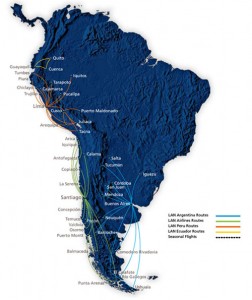 In terms of the airline’s total ASKs (available seat kilometres), these four domestic markets represent just 31% of the entire route network (up from 28% in 2008). Regional services within South America constitute a further 23% of ASKs in 2009 (down from 24% in 2008) while so-called “long-haul” international routes represent almost half of all ASKs.

In 2009, the fastest growing segment of the LAN market (by ASKs) was the Argentinian domestic market (+44%), followed by Peru domestic (+16%) and Chile domestic (+13%). Regional and long-haul international ASKs both grew by a more modest 6%.

Outside of its four ‘home’ markets, the most seat capacity is allocated to the US. LAN operates 47 weekly flights to Miami alone, with daily flights from Buenos Aires, Lima, Quito and Santiago. The airline also operates 22 weekly flights to New York JFK and 14 to Los Angeles. Toronto is served four times weekly via New York. San Francisco will become the airline’s fourth US destination when non-stop services from Lima begin on 1 July. The route will be operated four times a week using a 767. 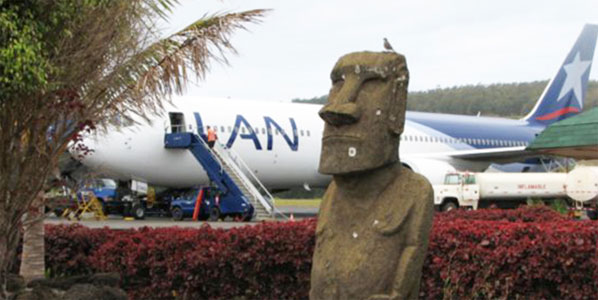 Would you like to visit Easter Island? LAN is your only choice. The island is served daily on 767-300s from Santiago de Chile and an additional twice weekly en route to Tahiti, French Polynesia.

Another long-haul destination is Auckland in New Zealand, served six-times weekly with the service continuing on to Sydney. In Europe, the only destination currently served non-stop is Madrid, which is connected daily to Guayaquil (Ecuador), Lima and Santiago.