London-Edinburgh/Glasgow traffic still in decline; British Airways, bmi and easyJet battle it out while Flybe looks on

Flashback to November 1995: London Luton to Glasgow was how it all started for easyJet with the “fly for the price of a pair of Jeans, only £29.00 one way” and that catchy call centre number. Passengers on this trunk city pair have now fallen by almost 25% since 2003. Curiously, the rail service has not improved noticeably.

The two busiest domestic air traffic routes in the UK are between London and Edinburgh, and London and Glasgow. London is served by a total of five airports, Glasgow two and Edinburgh just one. Analysis of demand on these city pairs since 1996 reveals that traffic levels in 2009 have fallen to around the level achieved in 2000 on both city-pairs. 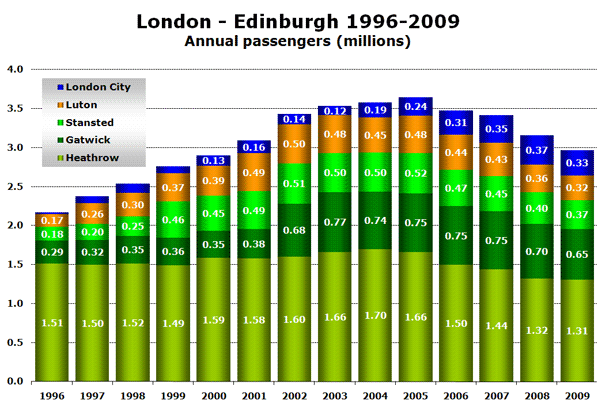 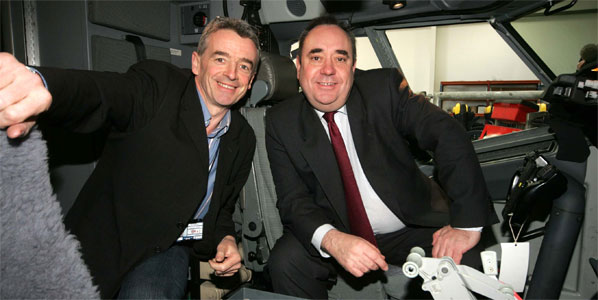 Ryanair has decreased its presence on the London-Glasgow market since 2003, but has just showed continued faith in Scotland by setting up a second maintenance hangar at Prestwick, creating 200 new jobs. Ryanair's CEO Michael O'Leary celebrated the announcement last week with the First Minister of Scotland, Alex Salmond.

Over the period 1996 to 2009, the London – Glasgow market has typically been around 7% smaller than the London – Edinburgh market, though in 2001, it was (briefly) bigger. Passenger numbers between London and Glasgow have fallen by almost 25% since the peak recorded in 2003. This peak coincides with when Ryanair carried 721,000 passengers between London Stansted and Glasgow Prestwick and was operating up to 10 daily flights. 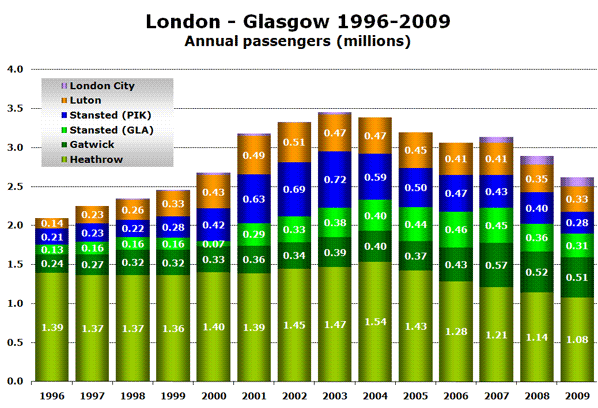 Last year, Ryanair operated just three daily flights on the route and passenger numbers were 60% below their 2003 peak at 278,000. Once again, British Airways is still the airline offering the most weekly flights (99), ahead of easyJet (77), bmi (50) and Ryanair (20).

The biggest airline in the UK domestic market, Flybe, does not operate any flights on these city-pairs. Although it operates a growing number of domestic flights from London Gatwick, its only non-stop Scottish services are to Aberdeen and Inverness.