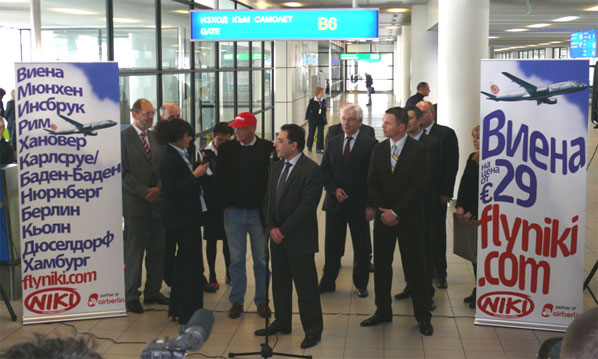 Niki Lauda and his airline has taken on Austrian Airlines in Vienna by launching a number of routes in the national carrier’s traditional focus area – Eastern Europe. This summer will see further, western routes added in competition with the Lufthansa Group airline.

Last year, Vienna Airport faced some difficult times. Slovakian-based SkyEurope, which had set up a base at the airport in March 2007 and started flights to 30 destinations, ceased operating on 1 September. Although overall airport traffic at Vienna was down 8.3% in 2009 to 18.1 million passengers, demand on eastern European routes fell by a more significant 15%. Traffic data for national carrier Austrian, now effectively under Lufthansa control, reveals that demand on its ‘Focus East’ network was down 10.3%, while to the rest of Europe (including domestic), it was down just 5.1%. Long-haul traffic was down 19%, which is reflected in Vienna reporting a drop in passenger numbers to the US of 34% (Austrian dropped Chicago O’Hare services, while Delta ditched Atlanta flights) and the Far East of 18%.

Over the last three years, airberlin and its Austrian partner NIKI have gradually been increasing their share of passenger traffic at the airport from 12.2% in 2007, to 13.7% in 2008 and 16.7% in 2009. With NIKI starting at least six new routes during February and March, this share is likely to grow to close to 20% in 2010. Austrian has revealed in its third quarter presentation last October that it intends in future to “… focus on volume markets … but continue to serve niche markets in CEE (Central and Eastern Europe)”. This will be achieved by focusing on the larger western markets and to operate fewer 50-seaters and replace them with 737-800s, leading to a significant cut in unit costs. As a first sign of change, flights to Odessa and Yekaterinburg will finish from the end of March.

The impact of the loss of SkyEurope can probably best be understood by comparing monthly data in 2009 with that of 2007, before the impact of the European economic recession. Last year between January and August, traffic was down around 1.5% compared with 2007, but from September through December, traffic was down on average by 6.9%, which suggests that SkyEurope’s passengers have been ‘lost’ rather than picked up by other carriers.

Last year saw the introduction of several new services, leading to increased competition on some routes. Both Aer Lingus and easyJet introduced daily flights to London Gatwick to complement Austrian and British Airways’ Heathrow services (and easyJet’s then existing Luton service). The Aer Lingus service will end next month, but bmi has announced plans to start Heathrow services in conjunction with fellow Star Alliance member Austrian. The new Gatwick flights helped London reclaim its status as the busiest route from Vienna with 440,154 passengers in 2009 (+6.9%), just ahead of Frankfurt with 438,439.

The effective merger of Austrian and Lufthansa forced the airlines to give up some slots at Vienna. NIKI and Adria Airways already provide an alternative on the Frankfurt route by operating multiple-daily services, but from the end of March, they may be joined by mapjet, a new Austrian airline which plans to operate double-daily flights using Embraer 195s. It has also indicated that it may operate from Vienna to Munich and Stuttgart, other routes on which further competition has been encouraged. airberlin pulled off the Stuttgart route in May 2008, leaving just Austrian and Germanwings to share the market.

Other new carriers and services in 2009 include Aegean starting flights to Athens (against Austrian and Olympic Air), Blue Air launching low-cost connections to Bucharest and Suceava in Romania, China Airlines going non-stop to Taipei (previously operated via Abu Dhabi) and Norwegian introducing both Copenhagen and Oslo flights. Competition on both of these Scandinavian routes comes from Austrian, with NIKI starting Copenhagen flights at the end of March. Now defunct MyAir also began Brindisi flights in June before the airline ceased operations the following month, while Air Dolomiti began flights from Rimini (previously operated by SkyEurope) at the end of May.

airberlin now operates the Cologne/Bonn service (against Austrian and germanwings) that TUIfly.com began last August, as well as starting its own double-daily service to Karlsruhe-Baden last November.

Apart from the new bmi route to London and the germanwings service to Hannover already mentioned, the next couple of months see the launch of six new routes from NIKI. Last week saw almost daily flights to Belgrade, Bucharest and Sofia get under way, all of which are currently served by Austrian, while daily flights to Barcelona, Copenhagen and Nice begin at the end of March. Again, all of these routes are currently served by Austrian, addling further pressure on the airline.

In addition, the ‘new Alitalia’ will return to serve Rome from the start of the summer season. The combination of all these new routes and demand for existing services has resulted in the airport predicting a 2% growth in passenger traffic in 2010.

For a full overview of the evolution of Vienna Airport over the last two years, click below to download our free spreadsheet.