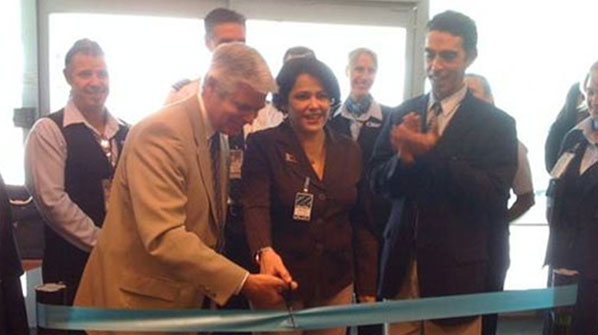 Fly me to Cuba: WestJet’s Gregg Saretsky (executive VP, operations) and Cuba’s ambassador to Canada, H.E. Teresita Vicente Sotolongo opening the airline’s Toronto to Varadero service in November. WestJet’s capacity grew by a modest 2.6% last year, but the airline has plans for 10% growth in 2010.

Passenger numbers at Canada’s top 10 airports were down about 6% in 2009. Between September and December, five airports (Calgary, Halifax, Kelowna, Ottawa and Victoria) reported passenger growth in three of the four months. However, Toronto Pearson airport (by far the busiest airport in the country) still reported a drop in demand of between 3% and 5% during the same period. 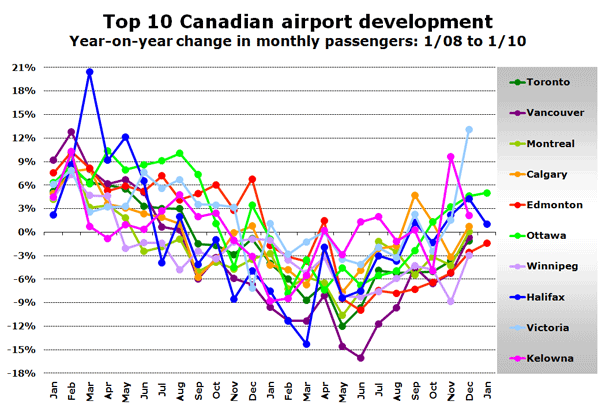 Among the busiest airports, Victoria performed best with traffic down just 0.4% for the year as a whole followed by Kelowna (-1.6%), while Vancouver was at the other end of the scale handling 9.4% fewer passengers in 2009.

A comparison of Canada’s two biggest airlines, Air Canada and WestJet, reveals that in the second half of the year their capacity and demand growth were quite similar. This is in stark contrast to 2008 when WestJet’s capacity (ASMs) and demand (RPMs) grew by between 17% and 18%, while Air Canada saw capacity fall by 1% and traffic remain virtually unchanged. Although WestJet’s capacity grew by a modest 2.6% last year, the airline has recently announced plans to increase capacity in 2010 by around 10%. 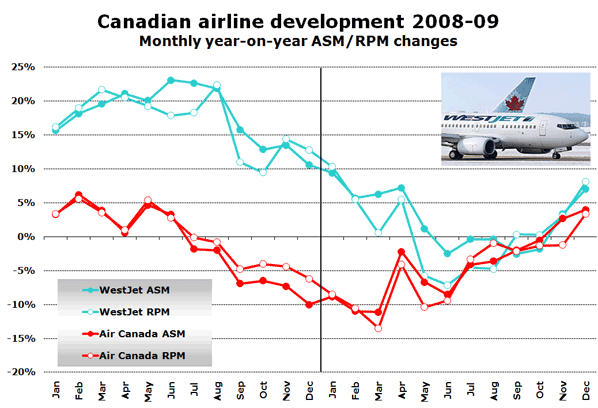 A closer look at Air Canada’s network performance in 2009 by geographic region shows that although total capacity was down 4.4%, capacity on transatlantic services was up slightly by 1.4%. In contrast, capacity of transpacific routes was cut by 12.5%.

This summer, Air Canada plans to open new long-haul routes to Athens and Barcelona (from both Montreal and Toronto), Brussels (from Montreal), Copenhagen (from Toronto) and Tokyo Narita (from Calgary).