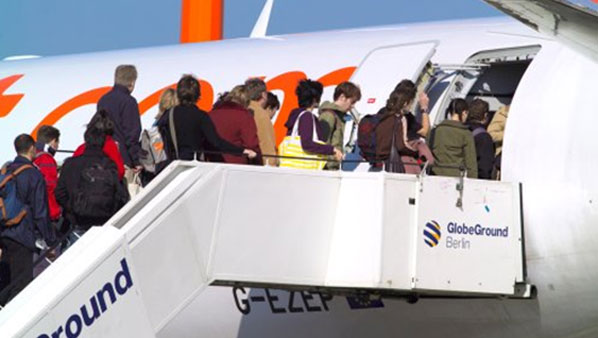 If this plane is heading for Gatwick, it was consistently 89% full last year – as are the Barcelona and Lisbon flights. Overall, our unique anna.aero analysis of this easyJet base reveals an average load factor of 83%.

Berlin Schönefeld (SXF) became easyJet’s first (and currently only) German base in April 2004. During the subsequent summer, easyJet operated 19 daily flights to 13 destinations. By the following summer, this had increased to 34 daily flights to 27 destinations. Since then, the total number of flights and destinations served has remained relatively stable, although some new destinations have replaced underperforming routes. Belfast International, Bratislava, Krakow, Ljubljana, Lyon, Maastricht/Aachen, Newcastle, Riga, Tallinn and Valencia are all no longer served.

Based on German government statistics, it is possible to estimate easyJet’s monthly load factor at Berlin SXF by route and by month, except for Palma where the airline faces direct competition. Analysis has been undertaken for 24 of easyJet’s routes in 2009 (data was only available until November) and been split into two graphs. The first looks at the airline’s 12 routes to Southern Europe; Greece, Italy, Portugal and Spain. 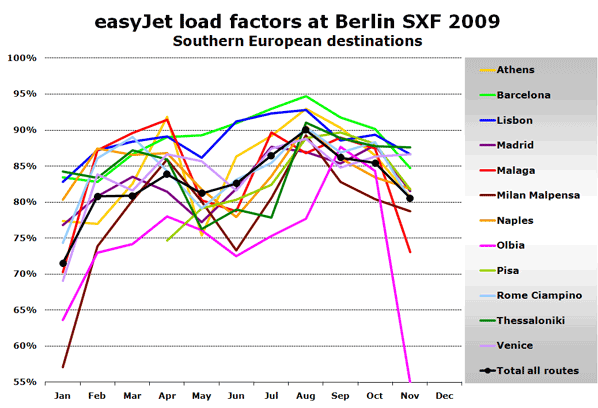 Barcelona (served twice-daily year round) performs consistently well, as does Lisbon. These two routes have the second and third best year-round load factors of just under 89%. Olbia appears to be the worst performing route with load factors in excess of 80% only in September and October.

The second graph covers the other 12 destinations in Belgium, Denmark, France, Hungary, Switzerland and the UK. These routes include the airline’s three busiest (to Basel, Paris and London Gatwick). London Gatwick also has the highest estimated load factor from January to November of 89%. 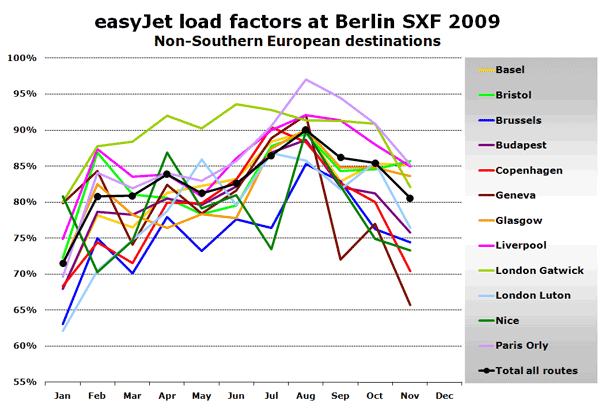 Despite having the lowest load factor of 75.5%, the Brussels route has seen frequency increased to 11 weekly flights this winter. To compensate for the demand seasonality of many of the southern European destinations (such as Lisbon, Malaga, Naples and Pisa), other routes to receive frequency increases this winter are Copenhagen and London Luton.

Across all routes, the average load factor for easyJet at Berlin SXF was 83%. This is a few percentage points lower than the average “booked” load factor that the airline refers to on its website for 2009, which includes no-shows. Maybe not surprisingly, given the relatively low average fare, the ‘no-show’ rate on LCC flights can be anything up to 10%, depending on the destination, the frequency of the service, time of day and time of year.