Coping with the growth: Cairo International Airport, which is operated by Fraport, saw the commercial opening of its state of the art third terminal in April last year. The shiny terminal, which alone has a capacity for 11 million annual passengers – or 75% of the airport’s total traffic – houses the national carrier Egyptair and its Star Alliance partners, and still leaves room for growth.

Since anna.aero analysed the Egyptian market last in October 2007, data has been released showing that passenger numbers increased by an entire 39% in the two years from 2006 to 2008. The growth has been somewhat higher at Egypt’s other airports than Cairo during this period. In 2009, the global financial turmoil showed in a total decline of nearly 3% against the previous year, in spite of Cairo traffic growing slightly. Still, the market has grown considerably during the latter half of the last decade and the 2009 total is 35% higher than that of 2006. 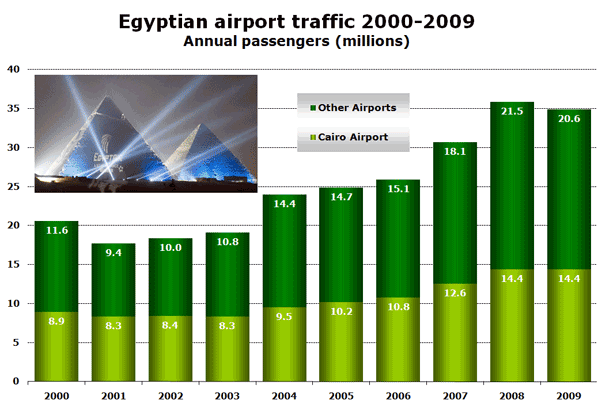 A total of 12 Egyptian airports (with more than 5,000 annual passengers) offer international services. Only half of them – Cairo, Sharm El-Sheikh, Hurghada, Luxor, Alexandria (El Nouzha) and Marsa Alam – do, however, offer more than ten daily international flights.

The Mediterranean city of Alexandria is currently served by two airports, the old El Nouzha Airport (ALY) and Borg El Arab Airport (HBE), previously a military airport that is undergoing major renovations. Later this year, El Nouzha will be closed for commercial traffic and all airlines serving Alexandria will be concentrated to the new Borg El Arab. 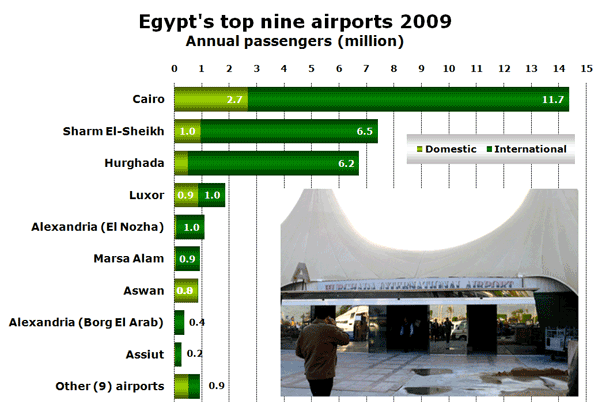 The top three airports in Egypt dominate the country market, with 82% of traffic. Domestic services make up 19% of the airports’ traffic, leaving the majority for international services. 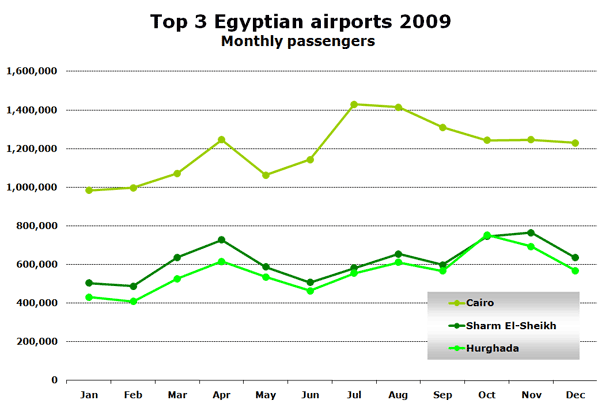 The seasonality profiles for airports in Sharm El-Sheikh and Hurghada closely follow each other, with multiple peaks in April, August and October/November caused by the two resorts’ ability to attract tourists to its year-round warm climate.

Both airports are still dominated by charter traffic. The shares of passengers arriving on scheduled services only amounted to 7% and 18% respectively in 2009. These numbers are, however, four times as high as they were three years ago. Examples of new scheduled carriers are the two European LCCs easyJet and Norwegian, which both began serving Egypt in 2008. 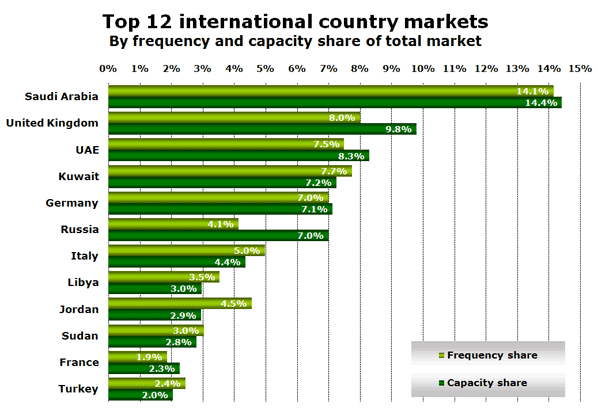 The largest international market for scheduled traffic to Egypt is from Saudi Arabia. As shown in anna.aero’s recent analysis of the Saudi market, Egypt is also the largest market for the neighbour country on the Arabian Peninsula. The market to the former colonial power, the United Kingdom, ranks second from the Egyptian side. anna.aero recently reported this country pair as one of Britain’s fastest growing.

Notably, Egypt is served from Russia with larger aircraft than other country markets, resulting in a gap between the frequency and capacity shares. The average aircraft size is 320 seats for this week’s traffic, in part caused by 747s being operated on 23 flights into Hurghada and Sharm El Sheikh. 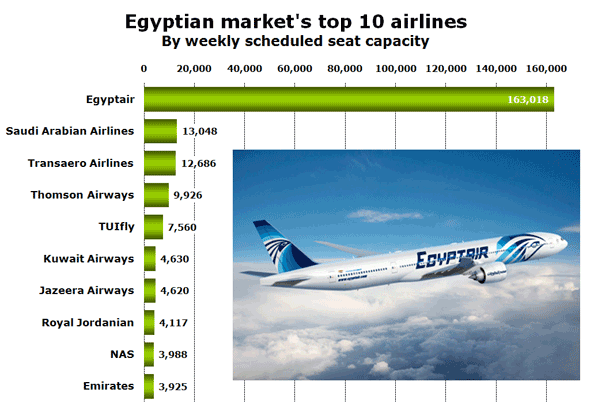 At 52% of the Egyptian market, the state-owned airline Egyptair, which anna.aero analysed in July 2008, still dominates. It has long been the only Egyptian airline to operate scheduled flights. Liberalisation is, however, slowly being introduced to the market.

Last year saw the launch of AlMasria Airlines, which now operates domestic flights as well as to Kuwait and Libya with its two A320s. This year, the establishment of Egyptian scheduled airlines continues with two announced start-ups. Nile Air will commence operations to regional, Middle Eastern destinations with two A320s. From 2012, its nine ordered A321s will start being delivered, allowing for a rapid expansion.

Sharjah-based LCC Air Arabia is also in the process of setting up a low-cost airline in Egypt, a local joint-venture similar to its Moroccan enterprise Air Arabia Maroc. The airline Air Arabia Egypt is expected to launch in April this year, establishing a base in Alexandria, from where it will serve domestic and international destinations.