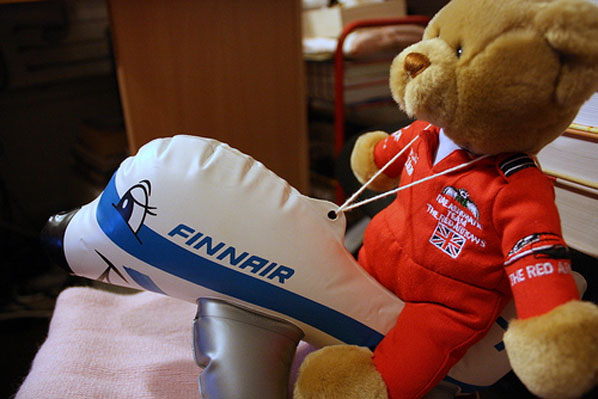 The last-ever Finnair MD-11 landed in Helsinki from Delhi this week - this isn't actually it, but if you look later on, we are promised the actual photos by our Finnair colleagues, who sadly had their camera stolen after the event. In the meantime, if you know anything about the stolen camera, please contact the Vantaa police department on +358 71 873 0291.

This week saw the final scheduled passenger flight for an MD-11 in Finnair colours. Monday’s flight from Delhi back to Helsinki marked the end of 20 years of operation of the trijet which was used by the airline to develop its Asian network. From now on, all long-haul flights will be operated either by A330s or A340s.

Finnair has had a challenging decade and passenger numbers for the airline remained almost unchanged between 2001 and 2009. However, this disguises some fundamental changes in the airline’s route network. At present, Finnair operates to 63 destinations non-stop from Helsinki with scheduled services. Domestic routes account for 13 of these routes, while the remaining 50 are spread across 32 countries. At Helsinki, the airline accounts for over 60% of scheduled seat capacity and 53% of movements. 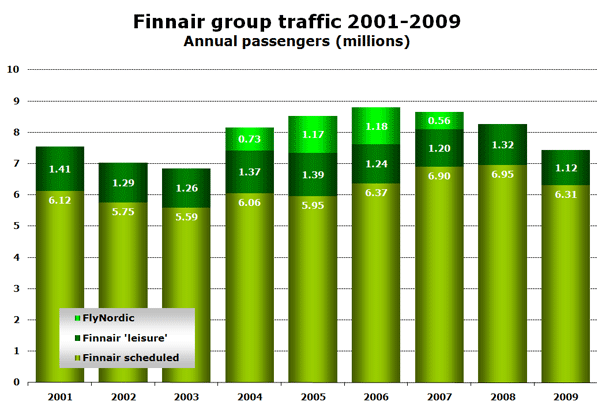 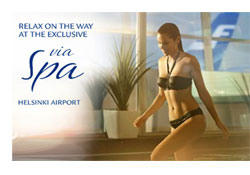 In the Finnish domestic market, it operates 54% of capacity and 40% of flights. Its biggest ‘rival’ is Finncomm which has a fleet of 14 aircraft (12 ATRs and two Embraer 170s) and contributes 27% of capacity and 38% of flights. Finncomm co-operates with Finnair on feeding traffic through Helsinki onto international services.

Asian routes account for over half of scheduled capacity (ASKs)

A look at Finnair’s 2009 traffic statistics reveals that Asian routes now represent over 50% of the airline’s scheduled capacity as measured in available seat kilometres (ASKs). European routes account for 36% of ASKs (but 58% of schedule passengers), while domestic routes represent just 4.7% of traffic (as measured by RPKs) but 21% of scheduled passengers flown.

Comparing this with 2003 (before Finnair created FlyNordic, which it later sold to Norwegian) reveals some significant trends. In just six years, ASKs have increased by 54% and RPKs by an impressive 82%, leading to an improvement in load factor from 62.2% to 73.4%. The number of passengers flown increased by a relatively modest 13% during this period. Domestic passenger numbers fell by 40% while passengers on Asian routes increased by 170% as capacity was almost trebled.

The airline’s current Asian network consists of non-stop flights to Bangkok, Beijing, Delhi, Hong Kong, Nagoya, Osaka Kansai, Seoul Incheon, Shanghai and Tokyo Narita. All of these are served with between three and seven weekly flights with the exception of Bangkok which is currently served twice-daily. Services to Guangzhou and Mumbai were dropped in October 2008 and May 2009 respectively. The recent announcement that Kingfisher is to join the oneworld alliance will enable passengers to have smoother onward connections via Delhi.

Finnair’s transatlantic operations are currently limited to New York JFK and a weekly service to Miami via Halifax in Canada.

Germany is leading non-Nordic market based on flights

From Helsinki, Finnair currently operates 813 weekly departures. Just over 30% of these are on domestic routes of which Oulu, with 57 weekly flights, is by far the best served. Sweden is the leading international destination (both Gothenburg and Stockholm are served non-stop) followed by Germany where five different cities are served (Berlin, Düsseldorf, Frankfurt, Hamburg and Munich). However, Stuttgart services ended last October. 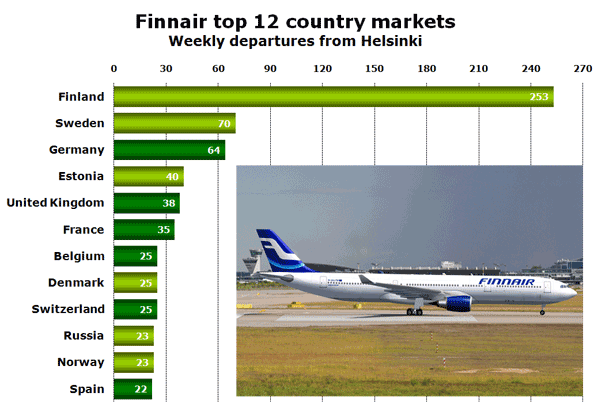 A total of six destinations are served in Spain with both Tenerife airports having direct services as well as Barcelona, Madrid, Malaga and Las Palmas (Gran Canaria). The use of larger aircraft on these routes means that Spain ranks sixth among Finnair’s country markets based on seat capacity.

A total of 57 weekly departures are allocated to Asian routes and just six to North American routes.