jetBlue celebrates 10th birthday; New York still #1 base serving over 50 destinations including many in Caribbean So many cakes!!! There are about 15 here – there were indeed far too many even to put on anna.aero

Last week saw New York-based jetBlue celebrate its 10th birthday. In that time, it has carried around 132 million passengers on a mix of Airbus and Embraer aircraft. It has established itself as a major player in the East Coast market, especially on north-south routes from the New York and Boston region to Florida. After explosive growth in its formative years, the airline has consolidated during the last two years with passenger numbers growing by just 2.5% in each of the last two years. Since 2002, the average annual load factor has been in the low 80s, although last year this fell slightly to 79.7%. The airline now operates a fleet of 150 aircraft; 112 A320s and 38 E190s (Source: Planespotters.net). The airline’s A320s are equipped with just 150 seats, rather than the maximum possible of 180 that pure LCCs such as Wizz Air achieve. 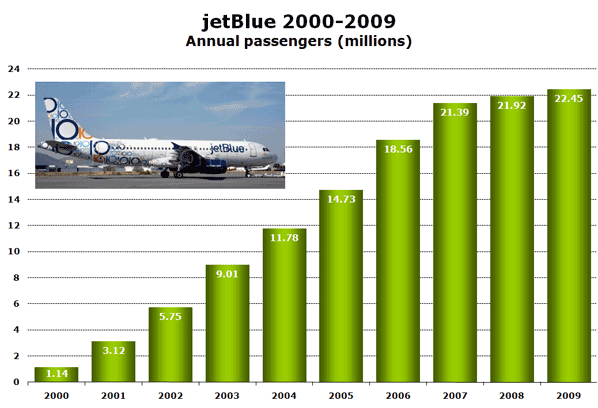 In recent years, the average sector length of the airline’s network has fallen from a high of 1,358 miles (in 2005) to 1,076 miles in 2009. Capacity has been cut on trans-continental routes, and some routes have been dropped altogether, for example New York to Ontario (California), and New York to Sacramento.

In addition to the cakes, there is also a 10th anniversary livery. jetBlue’s A320s are equipped with just 150 seats, rather than the maximum 180 that “pure” LCCs such as Wizz Air achieve.

jetBlue currently operates over 130 daily departures from New York JFK, accounting for over a quarter of the airport’s scheduled aircraft movements. It currently serves 51 destinations from the airport including 15 in Caribbean destinations such as the Bahamas, the Dominican Republic, Jamaica, Mexico and Puerto Rico. 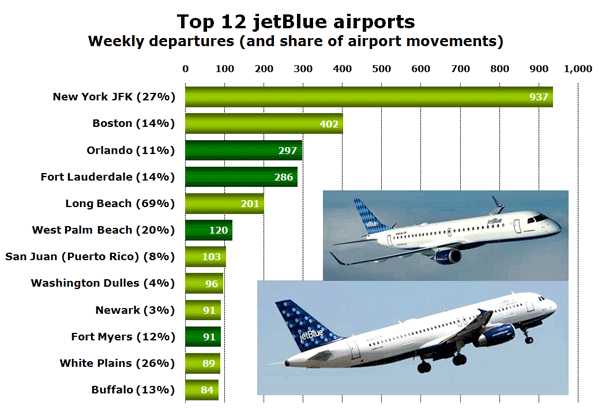 Four of the airline’s top 10 airports are in Florida, while another is San Juan in Puerto Rico. Only Long Beach (ranked fifth), where jetBlue has almost 70% of flights, is on the West Coast. At no other of its top 12 airports does the airline have more than a 30% share of movements. In total, jetBlue currently operates to some 60 airports.

Analysis of the airline’s top routes (by weekly departures) reveals that eight of the top 12 involve JFK. The top two routes are between New York and Florida where Delta is the leading competitor. 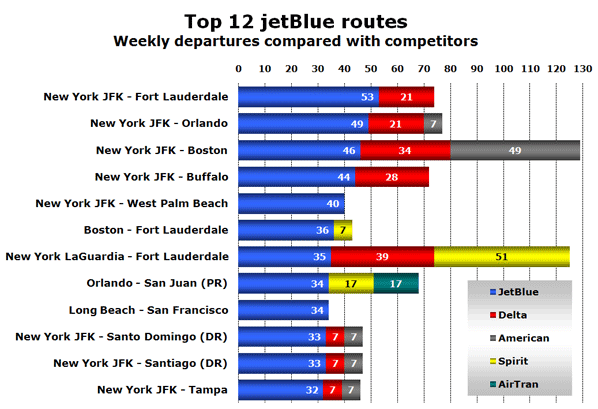 Delta competes head-to-head on eight of jetBlue’s top 12 routes, although only on the New York LaGuardia to Fort Lauderdale route does it offer more flights. On that particular route, both airlines are outperformed by Spirit Airlines with over 50 weekly departures. Between April 2003 and May 2006, Delta competed with jetBlue on several of its leading routes using its ‘song’ brand. This consisted of 36 Delta 757s equipped with 199 all-leather seats and was targeted more directly at the leisure market.

On only two of its busiest routes does jetBlue have a monopoly. The JFK to West Palm Beach route, and the intra-Californian route between Long Beach and San Francisco, are the only top 12 routes without direct competition.

New routes in 2010 focus on Caribbean

So far this year, jetBlue has started a new weekly service between Boston and Montego Bay (Jamaica) as well as a daily service to the same destination from Orlando. Other new routes planned for 2010 include Boston and New York JFK to Punta Cana (Domincan Republic) and Boston to San Jose (California). All of these are scheduled to start in the first half of 2010.