UK charter demand has fallen by a massive 26% in just two years, partially offset by the growth in low cost scheduled. And while charter carriers have done well in new and growth markets such as Egypt and Turkey, the scheduled market is still growing much faster.

Since anna.aero last looked at the UK charter market demand has fallen by a massive 26% in just two years. During that time Thomas Cook has merged with MyTravel (in March 2008) and TUI’s Thomsonfly merged with First Choice to create Thomson Airways (in November 2008). These two carriers now handle over 85% of passengers travelling on charter flights in the UK, with Monarch’s charter operations accounting for the majority of the rest. 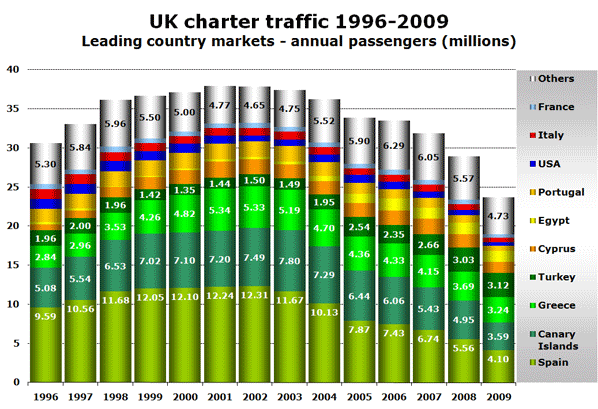 Analysis of the leading country markets over the last 14 years shows clearly how traffic to the main markets of mainland Spain, Greece and the Canary Islands has fallen dramatically in recent years. While the decline in Spanish charter traffic can be partly attributed to the rise in low-cost scheduled services from the UK, the fall in Greek traffic is less obviously explained.

Among the bigger country markets only Turkey has seen traffic growth in each of the last three years. LCCs have been slow to penetrate this market for a couple of reasons. As a non-EU state it is not a fully deregulated market and flights to Turkey from the UK are among the longest LCCs operate. Turkey’s share of the UK charter market has grown from 6% in 1997 to over 13% in 2009. Egypt is another non-EU market that has maintained strong charter flows during the last four years of around 1.5 million passengers per annum. Egypt’s share of the UK charter market has mushroomed from less than 1% in 1997 to over 6% in 2009.

But even though Egypt and Turkey have done relatively well in the charter market the scheduled market to these two countries from the UK is growing much faster. Similarly declines in charter traffic to Greece and the Canary Islands have been partly offset by growth in the scheduled market.