As Greeks come to terms with the harsh realities of the country’s parlous financial position, and the country endures a variety of general strikes (including from the country’s air traffic controllers), the nation’s two biggest airlines, Aegean and Olympic Air, announced plans to merge. What would such a merger mean for the Greek market in network planning terms?

At present, the two airlines compete on many routes in the domestic market where between them they operate around 80% of flights and account for just over 90% of seat capacity. 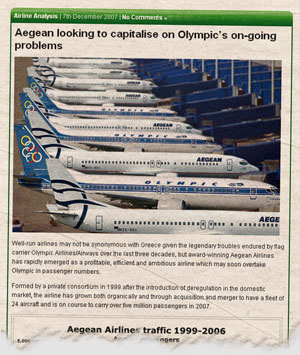 How we saw things in 2007 – now merger will give the entity up to 70% of all flights and seats at Athens, making it just about the most dominant major European flag carrier at its home base.

Olympic currently serves more airports, and operates more routes, but uses smaller aircraft (Q400s) on many of the domestic services. Merging the two carriers would create a new enterprise with a dominant position in the domestic market, which is unlikely to be good for consumers as fares are unlikely to fall, especially as the other competitors are much smaller: Athens Airways, which recently celebrated its first birthday, operates a small fleet of 50-seat regional aircraft on routes mostly involving Athens, while Sky Express has a handful of Jetstream aircraft mostly operating from Crete.

Analysis of schedule data in the Greek domestic market reveals that over 80% of flights and almost 90% of seat capacity is on routes to and from Athens. Aegean and Olympic Air are already the two leading airlines at Athens airport. Merging the two would give the combined entity between 65% and 70% of all flights and seats at the airport. This would make it just about the most dominant major European flag carrier at its home base. 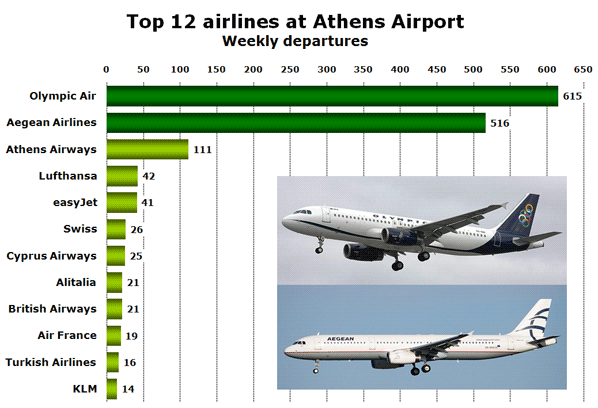 However, this dominance is primarily due to its domestic networks. If these flights are excluded, on international routes the merged carrier would have just under 50% of all flights and seats operating from Athens airport.

A total of 30 international destinations are currently served at least daily from Athens, with Larnaca and London leading the way. A merged Aegean/Olympic would only have a monopoly on one route (Tirana) with passengers having a choice of at least one ‘foreign’ carrier on the remaining 29. 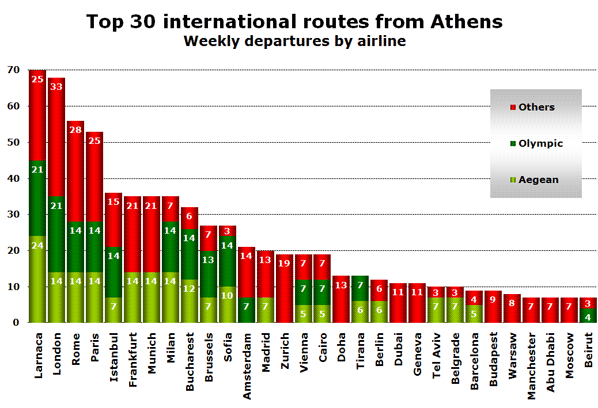 In terms of airlines, Lufthansa (serving Frankfurt and Munich) and easyJet (now with six routes to Berlin, London, Manchester, Milan, Paris and Rome) operate the most weekly international seats after Aegean and Olympic.

Countries not currently served non-stop from Athens by any airline (at least in winter) include Finland, Ireland, Norway and Portugal, while Sweden is served with just a weekly service operated by Viking Airlines.

Neither Aegean nor Olympic currently operates long-haul flights. The only non-stop transatlantic flight from Athens is with Delta to New York JFK, while Singapore Airlines offers two weekly flights to Singapore. Apart from the ‘MEB3’ airlines, Gulf Air, Royal Jordanian and interestingly Air Arabia offer connections to Asia through their Middle Eastern hubs.

In the past, Olympic’s long-haul routes lost a lot of money and seemed to be operated primarily out of a sense of national pride. It will be interesting to see if the “new” airline’s management, enthused by the enterprising pedigree brought to it from Aegean, will remain focussed on trying to operate a quality short/medium-haul network driven by sound business principles or whether it will be temped to stretch its ambitions to include long-haul services.