Aeroflot only ranks third in Russian domestic market; mergers will bring airline back in to the lead Aeroflot’s last international route to be launched: Dresden is again served by Aeroflot from Moscow Sheremetyevo, having been relaunched in July 2009. There is a considerable Russian community living in the catchment area and the route also ought to please Prime Minister Putin, who lived in the German city for five years in the 1980s. (Photos: Michael Weimer)

Although the Russian national carrier Aeroflot already dominates the international market to and from Russia with 25% of all seats, which is more than twice as many as runner-up Transaero, the national airline is only number three on the domestic market, behind UTair and S7 Airlines.

After the recent announcement that Aeroflot is to merge with Russian carriers Rossiya, Kavminvodyavia, Orenburg Airlines, Vladivostokavia, Saratov Airlines and Sakhalin Airlines, the airline will, however, more than double its domestic capacity and rise from third place with a 15% market share and become dominant with 31% of available seats in the Russian internal market, provided current scheduled capacity remains unchanged. 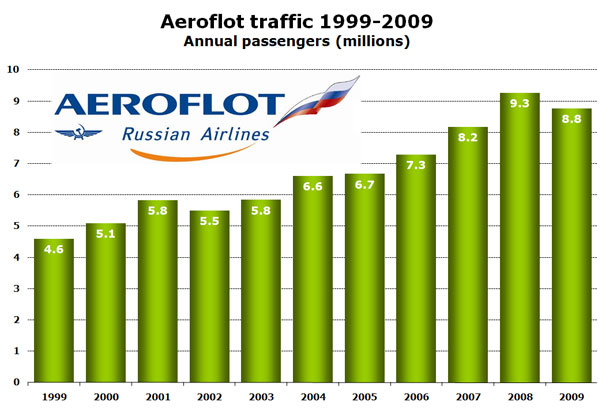 For a legacy carrier, Aeroflot’s growth over the last decade has been remarkable. The number of annual passengers transported doubled in the 10 years between 1999 and 2008, only to fall by 6% in 2009.

Aeroflot’s only Russian-made aircraft are today six Il-96s after the last TU-154 was retired earlier this year, with the remaining fleet divided between Airbus and Boeing. This mix of Russian and Western aircraft will continue, as the airline has orders for Russian Superjet 100s as well as both 787s and A350s. 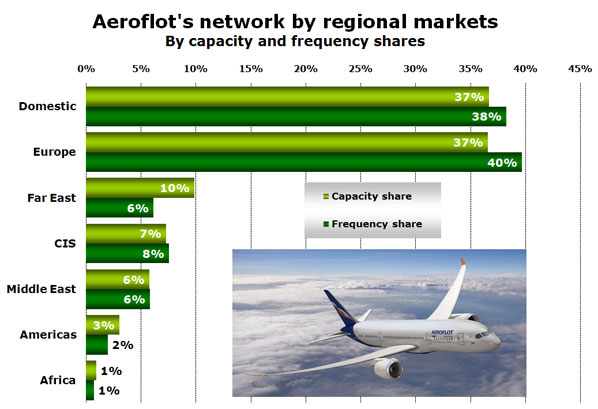 The current Aeroflot does not have as strong a focus on the domestic market as might be expected from the national carrier of a country as vast as Russia. Services to European countries make up nearly an identical amount of the airline’s capacity and, because of smaller aircraft, more of frequencies. Other noteworthy white spots in Aeroflot’s network are among the members of the CIS, the former Soviet republics for which Aeroflot used to be the national carrier during the Soviet era. For example, Aeroflot serves neither Belarus nor Kazakhstan, although the airline does codeshare with Belavia, the Belarusian national carrier.

Among Aeroflot’s top 15 international destinations, six of the airline’s SkyTeam partner hubs are featured; Paris CDG, Prague, Beijing, Milan MXP, Rome FCO and Amsterdam. At Aeroflot’s Moscow Sheremetyevo hub, a brand new terminal has been constructed, dedicated to the airline and its SkyTeam partners. The airlines are currently in the process of moving over their operations to this new Terminal D. This is all Aeroflot: The gorgeous new Terminal D at Moscow’s Sheremetyevo International Airport is exclusive to Aeroflot and its SkyTeam partners. Aeroflot currently alone offers more than 120 flights a day from the airport.

Last year, Aeroflot launched three new regular international routes, linking its Moscow Sheremetyevo hub with Ovda in Israel, Angola’s capital Luanda and Dresden, the latter being relaunched after a 16-year hiatus. Seasonal services also started to both sun and ski destinations; from Sheremetyevo to Hurghada and Sharm El Sheikh in Egypt as well as Innsbruck and Salzburg in Austria.