Japanese airline traffic down 14% in 2009 Q4 versus 2007; ANA benefits from JAL’s woes on international routes 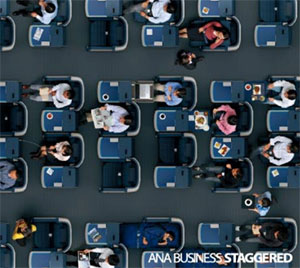 ANA’s just-introduced “Business Staggered” product has probably also staggered JAL – in January ANA’s load factor jumped to 77.9% – an unbelievable +15.1 percentage points! This is all to do with the woes of JAL. However, new routes this year by the MEB3 of Emirates, Etihad, Qatar Airways plus Air Canada, Air Macau, and Shenzhen Airlines may start to curb the results of this open season.

Latest traffic data from Japan’s two dominant carriers (ANA and JAL) and the Japanese Ministry for Land, Infrastructure, Tourism and Transport shows that although during the last quarter of 2009 international passenger numbers on Japanese airlines appears to be recovering, demand for air travel both domestically and internationally is running around 14% below the levels in the last quarter of 2007. For the third quarter of 2009 the corresponding figures were minus 8% for domestic traffic and minus 12% for international traffic. This suggests that things are actually getting worse rather than better in Japan, which may come as no surprise given the dramas that have been unfolding at JAL in recent months.

Japan’s domestic traffic had been in gradual decline even before the global economic difficulties of last year. However, only in early 2009 did domestic traffic fall noticeably faster than it had done in the two previous years. International traffic by comparison, which had grown in 2007, was struggling in early 2008 before falling dramatically in the second half of that year and the first half of 2009.

Last year average domestic load factors for ANA and JAL continue to hover below 65%, as they have for several years. In ANA’s latest financial year the domestic load factor has fallen 2.6 points to 61.0%, while JAL’s has fallen to 59.8%, down from 63.7% the previous year. This would seem to indicate that both airlines might need to consider further capacity and/or frequency reductions to better match supply with demand. 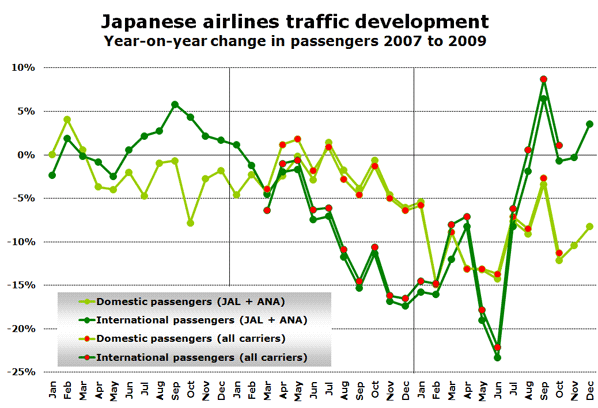 While the government figures for international traffic are basically those for ANA and JAL combined, in the domestic market the ANA plus JAL passenger figures represent roughly 92%-93% of domestic demand. However, the ANA and JAL figures combined are a pretty accurate indicator of the overall market with the advantage that the airlines report their figures much more quickly than the government do.

ANA, which has already reported traffic data for January 2010, reports that domestic passenger numbers are now just 1.3% below the previous year figure. In December this figure was 6.6%. Although ANA carries less than half as many passengers as JAL on international routes, in January it reported growth of 17.7% to 411,323 passengers, despite operating less capacity. As a result the load factor jumped an impressive 15.1 percentage points to 77.9%. This was the fourth successive month in which ANA’s international load factor had risen year-on-year by more than 12 percentage points. Some of this must undoubtedly have been down to the uncertainty that was surrounding the future of JAL.

In the coming months Tokyo’s Narita airport (which handled 32.21 million passengers in 2009 – down 4% on 2008), will see a number of new international services thanks to the development of additional capacity. From the start of the summer season the MEB3 (Middle East Big 3) all start new services: Both Emirates and Etihad will launch non-stop flights to their home bases while Qatar Airways follows in April, though its service will come via Osaka Kansai. Other foreign carriers starting new direct services include Air Canada (to Calgary), Air Macau (to Macau) and Shenzhen Airlines (to Fuzhou).

Not all new services are being provided by non-Japanese airlines. From 1 July ANA will start daily flights to Munich using a 777-300ER.