Endless possibilities – but mainly for foreign carriers? The Airport Agency’s marketing campaign for Bordeaux’s “billi” low cost terminal which opens in May. The move has seen a cascade of new services – Ryanair began Brussels flights in December followed by Bologna, Cork, Edinburgh and Porto at the end of this month. This summer also sees easyJet starting Milan and Gatwick (in addition to Luton), Cimber (Copenhagen) and flybe (Birmingham).

After anna.aero’s recent analysis of scheduled services to major European cities from German regional airports, this week a similar analysis is done for French regional airports. With Paris such a dominant centre for air travel in France, Air France’s preferred option is to feed regional passengers through the CDG hub onto international routes.

Using schedule data for last August (typically the peak demand month at many European airports), the number of weekly departures to a range of major European cities was determined. There are just six airports in France, outside of Paris, that handle more than two million annual passengers; Bordeaux, Lyon, Marseille, Nantes, Nice and Toulouse.

With the notable exception of Lyon (and to a lesser extent Nantes) most of the non-stop flights from French regional airports to major EU cities are provided by non-French carriers. 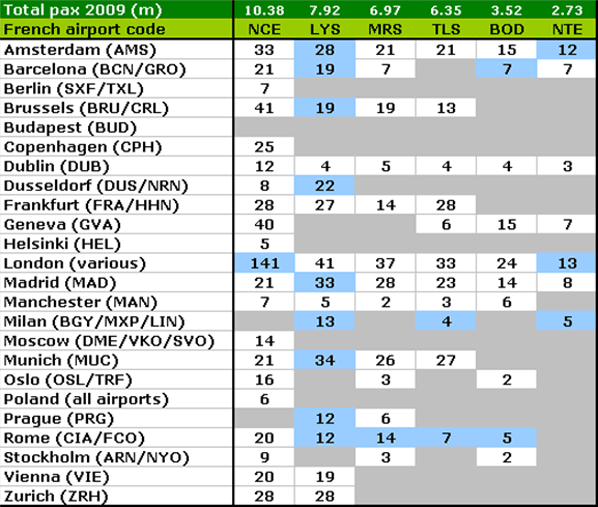 Source: OAG Max Online for w/c 3 August 2009. Blue shaded cells indicate that Air France operates some or all of the frequencies.

Of the 77 city-pairs with non-stop services in the table above, just 18 (less than 25%) are served by Air France. At Nice and Marseille, Air France operates to just one of the international markets analysed. Its daily London City service from Nice last summer represented just 5% of total flights to London and was then dropped in September. Among the selected basket of routes only Amsterdam, Dublin, London and Madrid are served from all six airports. Barcelona, Manchester and Rome are served from five of the six.

Thanks to the development of its new ‘billi’ low-cost terminal Bordeaux has attracted several new services this summer including easyJet starting flights to Milan Malpensa and Cimber Sterling introducing Copenhagen connections. Neither of these two cities was linked to Bordeaux last summer. In addition, easyJet is launching London Gatwick flights (which will compete directly with British Airways) to complement its existing London Luton service. 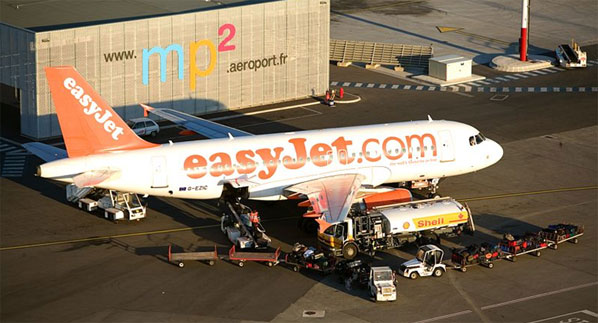 Europe’s first low cost terminal – mp2 in Marseille. Of the 77 non-stop services from the top six non-Paris airports, less than 25% are served by Air France.

Perhaps surprisingly, Budapest was not served non-stop from any French regional airport last summer. Air France and Malév both served Paris CDG, easyJet served Paris Orly and Wizz Air served Paris Beauvais; but no carrier served any other French airport on a scheduled basis. The only Polish route from these six airports was an almost daily LOT service from Warsaw to Nice, while the only non-stop Moscow service was a double-daily service by Aeroflot from Moscow Sheremetyevo to Nice. At least Prague was served from both Lyon (by Air France) and Marseille (by Czech Airlines).

There will be opportunities for airlines and airports to discuss further route development opportunities this summer at FrenchConnect, to be held from 23-25 June in Lourdes.